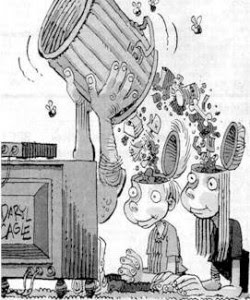 
Garbage In - Garbage Out

Been talking to everyone about cussing lately, and I've come to realize that my kids are unusual in that they don't really cuss. I'm not saying they never cuss. They do during rages, although not as much as you'd think. I'm sure they cuss at school (Kitty delights in telling me she does), but even she has learned a lesson about that.


I grew up pretty strictly in this respect. We weren't allowed to say the "naughty words" either. These are "substitute" words like "darn," "crap," "gah"... and rude words like "butt," "shut up," "stupid," and "hate." When I left home, I went through a phase in college where I cussed like a sailor, and found I couldn't stop even when I wanted to. It took quite awhile to break the habit. I have to admit that Hubby thinks outlawing some of the "substitute" words is a bit extreme, but he still follows the house rules.

I think the fact that Hubby and I don't cuss makes a big difference for the kids.


When my kids complain that all their friends cuss, and they should be able to, I tell them the "preacher story," no idea where I heard it before, but the gist is that a preacher at an orphanage tells the kids not to cuss because the words get stuck in your brain and slip out when you don't mean them to. He catches some kids cussing, the words stick in his brain, and when he's in a traffic accident he lets the cuss words fly in front of the gentle ears of his wife and family.

A couple of years ago, Kitty had started using "substitute" phrases. Her favorite phrase was, "What the Frick?" I'm sure she used the other word when with her friends. One day she was at lunch in the tiny Christian private school and the son of the director startled her. She yelled out "What the F___" ...well, let's just say she didn't use the word "Frick." She was humiliated in front of 1/2 the school (which was only about 20 kids, but still really upset her).

Ponito had a similar episode and we ended up joining the No Cussing Club.

I have a firm belief in "Garbage In - Garbage Out." That's why I'm pretty strict about media. We listen to Christian music only both in my car and on the kids' MP3s. That's because as most people know, music is a quick way to the subconscious and repetition drives it home. The kids argue that a lot of the music they want to listen to doesn't have bad language or isn't that inappropriate (well, not very inappropriate Mom). I tell the kids, especially those with issues, that I want things going into their subconscious to not just be "not bad," but to actually be GOOD.

I have to admit I've lightened up on CDs and radios, I follow more of a "don't ask, don't tell" philosophy. Although I don't buy or allow the kids to buy "inappropriate" stuff.

Since we bought the Clearplay DVD player I'm allowing PG-13 movies in the house. Of course I'm still watching most movies first with an eye toward what might set off Kitty (doesn't always work though since it seems to be social stuff that sets her off more than foul language, violence or creepy vampires.) The tween Disney shows she watches on TV often trigger a reaction (forced speech, manic laughter, agitation). I'm thinking it's seeing kids getting away with "naughty behavior" since Kitty has black and white thinking, and this is hard for her to deal with in "real life."


I draw a line in the sand about certain things. For me it's physical violence and foul language.

I knew by letting the kids know that foul language is not OK with me I was just asking them to use it when they're mad, but it's better than hearing it all the time. I think it may have helped that I've gone overboard in what we consider bad language and included "naughty words." Bad language to me includes substitute words (darn, crap, frick, shoot...), mean words (stupid, hate, ugly...), words you wouldn't say in front of the president or old ladies (butt, fart, boobs...). By going overboard, I think the kids get a thrill from the shock value of saying naughty words and don't even need to step up to really foul language.

So here's what we did:

Wow I used a lot of "quotes" in this post!
Posted by marythemom at 8:15 AM

My language is worse than DH's. He never uses bad language and frowns judgementally on anyone who does. Our kids are all potty mouths among their peers, BUT, their peers are too. Honestly, what's acceptable language among today's kids is vulgar. The F word is common and not even shocking.

However, I was raised by a bigot who frequently used derogotory to describe others, but my kids would never dream of dropping the N-bomb and think highly of every individual.

It's a different world... that's all.

And, to be clear, my kids use situation-appropriate language. For example, they watch their tongues when they're with us.

Unfortunately, you are definitely correct. When I was in school at a small school where no one swore, I never did. But when I left to move to New York, the temptation was quite great.