So how do you live with an adult child with Borderline Personality Disorder?

I've been trying to continue to age-appropriately (Kitty's probably emotionally about 13-14yo) therapeutically parent Kitty, with allowances for her legally an adult status, and it has NOT been easy.

For the last few weeks, I've been making Kitty do family therapy every session instead of alternating with individual therapy, because we're both extremely "dissatisfied" with family life right now. Kitty's therapist has been OK with this, but is frustrated, because she believes that unless both Kitty and I want to change, nothing is going to change and we're going to keep talking in circles.

Our biggest issue:
Kitty feels I'm being too controlling and I should let her do what she wants to (hang out with friends). She doesn't feel she should have to do household chores**, because she's "rarely home to make the mess." She's rarely home, because when I do see her I end up spending our very limited (her choice) time together telling her to do her few household chores (and asking if she's remembered to take her meds). It's not what I want our relationship to look like, but maybe she can't handle more. When we are having fun as a family (something I have to work hard at to make happen), Kitty usually just leaves, but if we catch her leaving and ask her why, she claims she's tired or doesn't feel well.

We both trigger each other. Kitty runs away (usually hides in her room or spends as much time as she can with friends). I get frustrated, because I know that nothing I say makes a dent, so I find myself making passive aggressive comments and simmering most of the time - which I hate, since that's not my personality.

The therapist has been saying we both need to compromise and be willing to change. She's said I need to be "more therapeutic" and back off... a lot. She wants me to go back and try all the therapeutic things I've done in the past and that I see no point in doing any more, because they haven't worked. At one point, the therapist said I needed to "find someone to talk to about my anger" so I can change (this made me fume). She told Kitty that Kitty needed to change too, but Kitty has already said that's not going to happen, and was so triggered and shut down that she admits she never even heard the therapist's comments.

The therapist has pretty much said that we're both refusing to change so there's nothing she can do to help. Right before Christmas, I walked in to therapy more mad and frustrated than other times - my nephew and his fiancee will be visiting for a week as of December 26th. I've been really focused on renovating the house as we get closer to our planned selling date (we're downsizing) so the house is a mess. I needed a little help from the kids. Bob and Ponito were not excited about helping, but completed the to-do lists I wrote. Kitty doesn't want to help so she's only home when we're going out to eat.

The therapist said we need to communicate - sit down and talk together. She said Kitty and I need to get together and talk about what chores I want done and deadlines.

I'm so tired of explaining that I don't think Kitty is capable of handling more.


I really want a way of holding her accountable and giving her consequences, but I'll settle for her to quit acting like she's entitled to all the adult privileges and being told I'm a a horrible person for treating her like the child she is.


After MUCH discussion with a LOT of people. I think what I've decided is that I'm going to stop feeling guilty about my unwillingness to change. I don't care how old she is, I'm the parent and this is MY house. She agreed to follow the completely reasonable  rules, but she's not.

I think I've been sending her the wrong message. That she has the right to tell me I should change. I'm done.

Now I have to figure out what that looks like. Probably something like the Basic vs Luxury plan. I definitely plan to reread Stop Walking on Eggshells.

Not keeping her room clean -
I recently went in to Kitty's room and discovered a container of 3 day old spaghetti and meatball on the floor (food is not allowed in bedrooms); 20-30 glasses many 1/2 filled with liquids (1/2 of these were in a plastic sack with some silverware in her trash can!); my shoes she'd borrowed and not returned; dirty laundry and trash so thick you couldn't see the floor... The room smells so badly that the hallway reeks even if her bedroom door is closed.

Possible Consequences -
We have let Kitty know that her room and the bathroom she uses MUST be clean and organized. I gave her a deadline of having it to this standard by January 1st - and when she asked if I would help, I said yes. If it's not clean by then, the I will strip and clean her room. There would be weekly inspections with fines.

I hate this, but this is a health hazard, and we cannot sell the house with her room like this.

Over the years, I have lowered my expectations of what Kitty is capable of achieving. Due to her ADHD, brain injuries, attachment issues, IQ... Kitty does better when she has achievable goals that are not overwhelming. It also helps me better able to parent her if I'm not comparing her to other kids her physical age. Kitty knows (and enjoys) this, but claims to resent it when she wants to feel justified in being angry at me. She says my lack of belief in her abilities makes her want to not do any thing and pull away. She has no answer for the therapist who questions why she isn't trying to "prove me wrong." 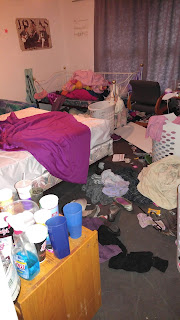 Kitty wants me to praise her for the chores she does do. I'm resentful that I had to nag, push, and tolerate a half-assed job. A lot of times, I'll walk past a job that I asked her to do days or even weeks before, see something blatant (like an overflowing trash can) and assume she hasn't done the job. I'll then tell her (again!) that she needs to do the job. She gets angry because I criticized her so she shuts down and pulls away.

Words of affirmation is both of our love language. A few months ago, Kitty randomly decided to give me praise daily, by telling me how pretty I am. 2 to 3 times a day. That sounds lovely, right? But I have asked her to stop (repeatedly), because the whole point of it being my love language means that it's a way of telling me you love me. She admits that right now she doesn't like me and doesn't want to be anywhere near me, so why would I want her superficial compliments?

"Adult" Boarder vs Family Girl
Posted by marythemom at 9:41 AM

OH-MY-GOD.
I've been dealing with this for years. My son who is now 18 was diagnosed as Bipolar (like his father). He was hospitalized twice at age 15. He spray painted words and symbols on my house, front to back with neon orange paint. I fept it was a cry for help, so I had him admitted. (That episode had been brewing for some time.)
Within three months of his discharge, I had to admit him again. This time he had snorted pills such as Klonopin, etc. He was out of his mind, hallucinating and paranoid/agressive.
He quit school (10th grade). I've been trying to help him with therapists and psychiatrists but nothing helps. He was approved for Social Security Disability at age 17. A few months later at age 18, they did an adult re-evaluation. They denied his Social Security. I'm now in the process of filing an appeal.
He was arrested and hospitalized yet again last week (04/10/17)
The new psychiatrist feels that he has a Personality Disorder, not Bipolar.
I saw the pictures you posted on this blog and thought,HOLY COW! IT'S NOT JUST ME DEALING WITH A CHILD WHO DOES THIS!
I've been through everything you've described in this blog and continue to deal with it.