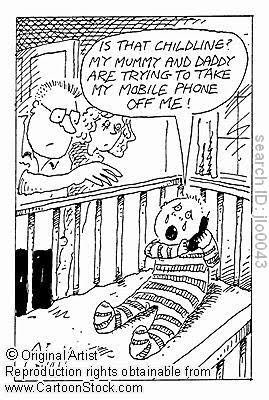 Counselor: " Having to eat broccoli twice a week is not child abuse."


A very common concern with RADishes is your child making false allegations of abuse against you. This is a very real issue, and something we used to deal with quite often. Our kids always think the grass is greener somewhere else. They think that if only they'd been adopted by another family their life would have been perfect - no chores, being allowed to do anything they want to whenever they want to....

It often occurs to them that if they get removed from your home then by some lucky chance they will get better parents next time (Daddy Warbucks comes to mind). Or they will get to magically return to their "perfect childhood" (yes, we know their childhood is the reason they were in foster care or institutions in the first place, but everyone has a little Annie inside them thinking about the perfect family just waiting to take them home).

Another mom was very concerned about her daughter's threats to call Child Protective Services (CPS), and I mentioned a time after Bear had been injured while being restrained by Hubby that Kitty and Bear had been removed from our home while we were being investigated. She was afraid that her child would be removed from the home if the child managed to make a false allegation, or worse that she would lose all of her children pending the investigation - which of course would be horribly traumatic for her non-RAD or healing RAD children. The following is my response to her followup e-mail.


Every state is different, but in TX it is not required for the state to take the child out of the home while investigating. When we brought the kids here from Nebraska, they had to have a local caseworker so Nebraska paid our adoption agency to provide one. Unfortunately, it was OUR agency’s policy to remove the child pending investigation. Since both children were foster children, they removed both children.

Since the charges were against my husband not me, we even offered to have him leave the home until the investigation was complete (they refused). They would not/could not remove children who were not "their" foster children. The state of Nebraska found out they’d removed the children (we called them!) and they pitched a fit! Our children were still wards of the state of Nebraska and Nebraska had not given permission for them to be moved.

Our agency would not budge, and would not fight for us with CPS because CPS is the governing body of all foster/adoption agencies, and the agency didn’t want to get on their bad side and possibly get cited or investigated themselves. Luckily for us, the Nebraska DHHS (Dept of Health and Human Services) did not have that concern. We got the fastest investigation anyone in the state of TX had ever seen (can take months usually). We had the children back in our home in less than a week.

The agency even tried to make us pay for the week of "respite care" (which we'd been begging for for months, but had been told they didn't have). We did manage to get that worked out without us having to pay.

No one ever suggested removing our birth children, and if the adoption was final, the agency wouldn’t have had a say in the removal of our adopted two. We were investigated for breaking foster parent rules (injury during an improper restraint, and the home was “too cluttered”), if we hadn’t been technically foster parents, neither one of these would have brought us under investigation (in fact the police often said we had the right to “knock his block off” as long as he took the first swing – which he did).

If we had been found guilty I still don’t think we would have lost custody of the kids, any of them, although it was possible with the not yet adopted two. As it was, we had to attend a couple of (bogus) classes - the proper way to do a Restraint – which doesn’t work on adult size kids, and Behavior Management – which pretty much consisted of don’t let him escalate – like that was possible!

One bad part was that if it had been me and not my husband under investigation and the charges were proved, I could have lost the possibility of any career working with children (I have a Masters in Social Work). Having a child abuse indictment means you can’t pass a background check to work as a police officer, nurse, therapist, teacher, childcare worker… any of the health care/ social service type industries. We would definitely have lost our license and could never have been foster/adopt parents again.

While technically the charge was declared “indeterminate,” it is probably a good thing my husband is an engineer/business man. I'm not actually sure if this will prevent us from adopting again, since the charges weren't dismissed as false. They may still be hanging over our record.

What I’m trying to say is that I doubt we would have lost our biological children (and any already adopted children if we’d had any). In a home without foster children, the rules are nowhere near as strict.

After the adoption, when we had to call the police to our home because our daughter was out of control they did NOT call CPS – even though we had her in a full restraint (she obviously needed it). When our son called the police while still in foster care, they refused to take him out of the home unless he was actively suicidal or homicidal (they saw the tiny bruise on the back of his neck and didn’t think anything of it - it only became an issue because our agency decided it was).

So my advice: Document, document, document! Even if it’s just keeping it all written in a spiral notebook with the times and dates, that can only help you if the child does start making false allegations. I specifically told psychiatrists, therapists, school behavior staff, caseworkers, anyone I could think of.

Don’t teach your child the number for CPS, and she’ll automatically call 911 – who usually won’t do diddly squat. In fact, if you get her diagnoses and some info about her to them before you need it, they’ll come prepared to back you up.

So yes, you’re giving yourself an ulcer over nothing, so stop it! (and yes, I realize that telling you not to worry is like telling someone not to think of pink elephants, and the pot calling the kettle black, and a bunch of other hokey saying that all mean – do as I say not as I do).
Posted by marythemom at 10:44 AM

Email ThisBlogThis!Share to TwitterShare to FacebookShare to Pinterest
Labels: allegations

our daughter's therapist and psychiatrist recommended we be proactive and contact the local PD and CPS to tell them we had an adopted child with RAD and what type behaviors to expect should they get a phone call from a "good samaritan" to check us out. We did so and it paid off in spades. Plus, we got video and audio footage of our daugher's behaviors and our responses to her behaviors.

Who watches the watchman? It's an age-old problem.