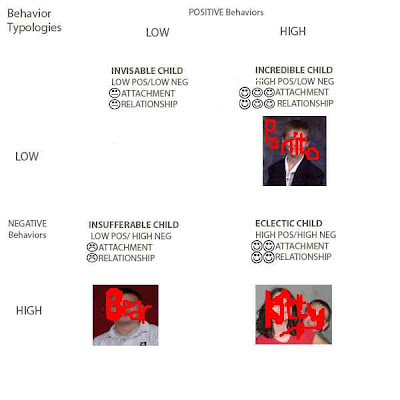 We tend to focus on "fixing" our child's negative behaviors, and not focus on their positive behaviors. The truth is that these are not opposites of each other, but unique independent sets of behaviors and every child is on a continuum of both.

This is why a child can exhibit all the negative behaviors (lying, stealing, destructive...) and we still love, value and care for them because they also give us a lot of positive/attachment behaviors, like warm eye contact, compliments, doing chores for us "just because," pleasant demeanor...

Negative Behaviors:
I don't really have to describe the negative behaviors , do I?!


In Katharine Leslie's Behavior Typologies there are 4 types of children.

Why Hubby and I disagree on whether or not Kitty and Bear are Insufferable or Eclectic.

I'm not positive why Hubby and I disagree, but my theory is that it is because the children present themselves differently to each of us and we have different needs to be met (I tend to want more nurturing attaching behaviors; Hubby tends to want compliance (being responsible), honesty and a respectful attitude. In other words he wants RRH-and I want AFTBA. (Family Values - RRHAFTBALL).

Both of us agree that Kitty has high negative behaviors, but after over 2 years of attachment therapy, I feel that Kitty is finally attaching... to me. She has major issues with men so has kept Hubby at arm's length for years. Any attachment behaviors she does try to show to Hubby he perceives as manipulative... and maybe they are. I feel nurturing and attached to her so am more willing to overlook her negative behaviors.

For Bear it's a little different. As the primary caregiver and most knowledgeable about attachment issues, I perceive Bear's attempts at positive behavior as manipulative and fake. Some of this is my own issues (I felt rejected by him in the beginning when I was giving him my best attachment behaviors and I probably suffer some PTSD from dealing with intimidation and control issues towards me, and of course the downright scary episodes).

A lot of the cause of Hubby and my disagreements is the fact that Hubby flat out does not see Bear's more negative behaviors because Bear hides them from him. Plus, none of these aggressive behaviors are directed at Hubby. From Hubby's point of view, the more aggressive behaviors have gone, and Bear is generally compliant and respectful toward Hubby. Plus, Hubby is not around to catch Bear in the lies as often as I am.

Hubby and I were talking about this while getting ready for Bear's parent/ teacher conference this morning. I'm guessing Hubby feels that I am acting vindictive and intolerant toward Bear... and I can admit that I am to some extent, but I also feel that we are doing Bear a great disservice if we allow him to manipulate and triangulate us.

My approach to discipline is to Structure and narrow Bear's world to a size he is more capable of managing. Hubby's approach is that Bear is about to be let loose in the "real world" so we should let him start dealing with real world consequences.


Posts about Structure vs "Real World"

Real World
Swimming in the Ocean
18 is Not the Finish Line
Posted by marythemom at 7:35 AM

I totally understand. I think my husband and I would rate our RAD son differently. Actually there days I would rate him differently, LOL. Right now, it's spring and so he is doing his annual decline to the summer meltdown. However, as usual, I see more of the bad behaviors than dh, though dh does beleive me, it's hard for him to ignore the kid that sucks up to him and acts so loving towards him and even towards me sometimes in public.

In the past, this as been a major issue between my husband and I with MK. I think after 24 years of dealing with her, we both see her pretty much the same- she is more eager to please Dad and more likely to aim her rage at me. Whoever is in the better space is the lucky one who gets to deal with her. She is also FASD, so she may never be independent. Good Luck with Bear! (narrowing MK's world when she was a teenager was the only way I survived)