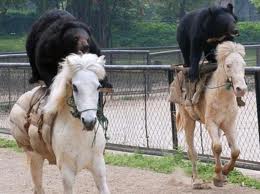 Kitty started equine therapy recently.  It's an interesting therapy.  We've done some volunteer work with a place that does equine therapy for kids needing more occcupational-type therapy and it is excellent for kids who need physical and speech therapy.  Kids with autism seem to get a lot out of it too.  The kind of equine therapy Kitty is getting is different.  For one thing, she doesn't ride the horse most of the time, and this therapy is specifically designed for kids who are emotionally disturbed.

The special school that Kitty goes to works with this program about 1 or 2 times a month so Kitty had been out before, and had already chosen a horse with whom she wanted to work.  (Bear worked with them for years through the school and wanted to do rodeo with them a couple of years ago, but it's a 45 minute drive one way so I nixed that idea).

The fun part was I got to pick a horse too!  I won't participate most of the time, but I will get to ride occasionally (I really miss riding).  Don't worry, I chose a big horse that can support my not so petite frame!  :)

The kids get to pick the horse they want to work with and can stay with that horse the entire time.  Kitty picked one that is not a riding horse, so I guess she'll have to pick another one for actual riding, which I think will be about every 3rd or 4th session.

Will be interesting to see if equine therapy is helpful.  I definitely saw some corollaries between what they were doing with the horse and what we are working with Kitty, and believe me, Kitty was not happy when I pointed them out.

The first session they let the horse go wherever it wanted to in the round pen (no halters or anything).  She was supposed to get it to allow her to groom it and get it to follow her around – with no treats or ties.  The equine therapist got my daughter to notice that the horse was protective of its dominant side with my daughter (some horses try to stay safe by keeping their dominant side free in case they need to strike out).  The therapist pointed out that we can’t follow the horse’s wishes and just ignore the part that the horse is trying to keep safe because if we can’t touch their feet or groom parts of their body then we certainly can’t ride them and they can’t be productive and useful which means they aren’t earning their keep and aren’t happy.

The equine therapist asked my daughter if she had a part of her body she protected and didn’t want anyone near.  She replied her back.  Of course I would have said her heart, but that wasn’t the way the question was phrased.  Although it was implied, the therapist didn’t directly state the connection between how the horse was protecting itself and how my daughter protects herself.  Maybe the therapist didn’t want to push it or maybe she assumed Kitty would make the connection herself.

Maybe it was wrong, but I decided in the car on the way home from therapy to go ahead and clearly state the connection and that this is why we don’t give my daughter her way when it comes to leaving her alone and ignoring the parts of her that she wants to keep safe.  She didn’t say much, but she clearly didn’t like the idea that we might be right in how and why we parent the way we do.

Another thing I found interesting was how you get the horse to come to you and follow you around.  Some of it made sense.  We'd been taught at the equine therapy place where I worked that horses are pack animals and if you walk like you're a pack leader and know where you're going, then they will just naturally follow you.  Getting the horse to come to her though was counter intuitive.  Basically she was to stand off to one side and kind of behind the horse (out of it's line of sight), facing the horse and enthusiastically try to call it to her.  Words don't work with horses, so she was to use her will and movements.

That made sense, but what wasn't intuitive was how you rewarded the horse for first looking at you, and eventually coming to you... you turn away and "release" it from the discomfort/ pressure of your focus.  So she'd call and clap her hands on her thighs and make clicking noises until the horse looked around, and then turn with her back to it.  It worked.  She got the horse to come to her and follow her around the round pen, but definitely didn't have a good corollary in attachment therapy!

Since Kitty's stated goal for after high school graduation is to be a preschool teacher, I decided to arrange for her to do an unpaid "internship" with a friend of mine who runs a home daycare.  At first the friend said just a couple of days a week, but Kitty has been so helpful that she's said Kitty can come any time she wants.  The friend was watching a neighbor's children too while their mom was painting a room in the house, and now the mom wants Kitty to come work as a Mother's Helper.

Kitty loves it, and seems to do very well with it.  My friend loves having her there.  I have frequently reminded my friend that Kitty should never be left alone with the kids (not that my friend can't ever leave the room, but that she shouldn't leave Kitty in charge for extended periods of time), because Kitty has said some things that concern me (she gets upset if she feels a child is being picked on or treated unfairly and I'm concerned what she would do to protect that child - some of the things she's said she wants to do to the "offending" child(ren) are very inappropriate).

It's been a total blessing to have Kitty happy and supervised for 3 to 4 hours a day.  At home things are going OK, but Kitty is definitely regressing a little emotionally (or maybe it's just more obvious now that she's not as depressed and angry ALL the time).  I took her for an assessment with a new place for intensive outpatient therapy and he commented on her immaturity.  That's rare.  Usually no one seems to notice.

I'm still worried about what's going to happen when school starts and Bob comes home from Grandma's for good, but for now we're in an OK place.
Posted by marythemom at 12:52 PM

I'm so glad you posted about equine therapy, my daughters therapist just talked to us about starting this with her.

Mary sounds like things are looking up. So happy that you guys have found a brighter place. Ibet it was really validating for the professional to see her like you see her since it seems many of the ones you turned too looked right past what you were trying to point out.

Thanks a lot.I am very glad after going through this niche content. keep writing these types of content.
Equine Therapy

I am first time here and really enjoyed to read above content about Equine Therapy.Thanks and keep posting more about it.