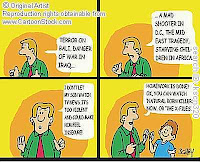 Michael is an adult RAD survivor. He is not a licensed therapist, but I see him as an expert in his field. He recently wrote a blog post called Media and RAD - The Ugly Truth in which he discussed his reaction to a crash scene in the movie Armageddon.

Ironically, our issues with media, particularly with Kitty, had recently become such an issue that I had decided to have the kids do an assignment to reinforce why I am so strict about this. Kitty especially wants to be allowed to watch shows and movies that I feel have a negative/ triggering effect on her.

Almost a year ago, I had Bob do a FAIR Club assignment about the effects of media on kids (posted here). She did a good job. So a few days ago, I decided to have the kids take a quiz on the report. Mostly fill in the blank stuff, but I wanted to be sure they actually read it. (Kitty couldn't do the quiz though. *sigh* She just didn't understand the questions. I'll have to sit with her to do it.)


As a preschooler, my daughter (RAD) was allowed to watch horror movies (like The Scream and Jeepers Creepers). In foster care (age 9-11) her favorite TV show was CSI. She loves violent shows, the more blood and gore the better - I know this is typical for kids with RAD and PTSD.

Personally, media of all kinds has always affected my moods (I dealt with depression and attachment issues) so I choose to watch nothing but comedies, and read nothing but books, that have happy endings. I don't like horror, thrillers, drama, or tragedies.

With all my kids, both adopted and bio - ages 10-15, I don't allow them to watch PG-13 movies, and seriously limit what they can watch on TV (not even certain cartoon channels and shows), and what they play (no E-10+ computer games, no Bionicles or Pokemon).

All my kids think I'm the meanest mom ever and swear they can handle it. When I do give in or they see something at a friend's house, sometimes their reactions are immediate (agitated, talking loudly, aggression, leaving the room), but other times it's delayed or less obvious (especially if they know it means I'll remove approval to watch something).

So my question is, am I the meanest mom ever?

Would it have been helpful to you [Mike] as a teen to have your media "censored?"

I realize my "censoring" doesn't change their past at all, and they ARE dealing with the issues media could be bringing up both in therapy and reality all the time but I don't think they need the exposure to upsetting media all the time.

My adopted son (15) appears to be dealing with his life well right now, and could potentially be able to handle it (he sneaks it anyway), but our adopted daughter (his biological half-sister, age 14) is emotionally fragile - truthfully, I expect her to be in residential treatment within the next couple of weeks.

So what do you think? My adopted children were abused and my bio kids have PTSD caused by living with angry, "acting out" older siblings. Should I lighten up or get stricter? I know lots of moms who don't let their kids watch TV at all.

And here's his response:


Dear Mrs. T,
Ironically, for not being a professional therapist, I get the same question “am I the meanest mom ever???” question almost daily now. My resounding answer most assuredly is NO. I am of the belief that while being a mom or a dad is a great thing, there is a limit to the amount of “coolness” or leeway that you can provide. If you feel that they don’t need the added pressure and exposure to certain media, be firm and be confident in the fact your making the best call that you can. You’re the mom and that’s the way it goes.

I find it refreshing that you want to be able to filter what your kids see. I think that in today’s society it’s easier to toss a child a T.V. [phone or tablet] while parent’s pursue other interests. It speaks volumes to me that you want to have such limits in the interests of your children’s safety in your household. It’s a very inspiring value.

“The meanest mom ever” comment of course is not accurate and remember with R.A.D. kids, no how matter much they push your buttons and give you trouble, don’t take it personally. Their outbursts aren’t about YOU it’s about THEM. I remember holding a knife to father’s throat, not wanting to kill him of course, but to assert authority. It wasn’t about him, it was about MY anger.

Sounds to me like you're making the call for your family that you have to make, in a society that tells you to do otherwise. You're sticking to your guns and your values. I think your kids will not only say, “Thank you” one day for your sense of values you have impressed upon them, but the “Greatest mom ever” mug you eventually receive from appreciative young adults will prove me correct.

Sincerely with regards and the warmest of wishes,
Michael Shttp://www.ofaat.org/http://ofaat.blogspot.com/


So what do you think?

I know I'm not the meanest mom ever (I know too many moms of RAD kids to ever believe that), but am I doing the right thing? Should I be doing more? I know a lot of moms that don't let their kids watch TV at all.

How should I handle the different needs of my 4 very different kids? Some of whom can handle what we have now, and others who would probably benefit from even more restrictions.

I believe that children should not be treated equally. Life is not fair. Each of my children has different needs, but it's hard for Kitty especially, to accept that without being jealous. She can't see the privileges she's getting that others don't (like not being held accountable for her inappropriate behaviors). All she sees is that she's older and yet isn't being treated like a 14-year-old (because developmentally she's not one and she can't handle it).

One reason I've questioned our decision to adopt children older than my oldest bio child is that it makes it more difficult to allow the younger kids to have privileges they've earned and can handle. Even though in my head I know that treating my children equally is not in their best interest, explaining that to them and others is hard!
(Blog Posts on This Subject:
Explaining Age-Appropriate Parenting to Your Child,
Dear Person Who Just Doesn't "Get It"
Adopting Out of Birth Order)

OK, I've babbled on long enough. Time to get ready to take Kitty to her psychiatrist appointment. I'm expecting him to write a recommendation for her to go to residential treatment tonight.

Here's how we handled Media: 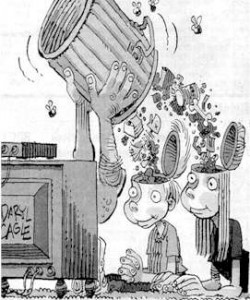 I subscribe to the “Garbage In, Garbage Out” philosophy.  I have removed anything I don’t think is GOOD for them (not just "not bad").

Age Appropriate Parenting
Maybe some kids can handle the innuendo, adrenaline-inducing, emotionally-triggering, violence…  mine can’t.  My kids are developmentally much younger and have very black and white thinking that makes it hard for them to understand when it is (and is not) appropriate to emulate what they see on TV.

We decided that to treat them as though they were their chronological/ physical age, or as if they are able to handle things we have recognized as triggers, was just cruel and unfair.

Structure and Caring Support
It is definitely hard to follow through on this!!  Providing all this structure is draining, to say the least. Most people don’t understand it, and my kids certainly don’t love it, but we’ve had fewer meltdowns and the foul language and attitudes have improved, for both my kids of trauma and my “neurotypical kids.”
Posted by marythemom at 1:14 PM

Email ThisBlogThis!Share to TwitterShare to FacebookShare to Pinterest
Labels: media

Very interesting! I didn't realize there was a connection between violent media and RAD kids.