Not sure I'm going to be able to display this correctly. Hopefully you can click on it and make it bigger. Here's the link to the original document. 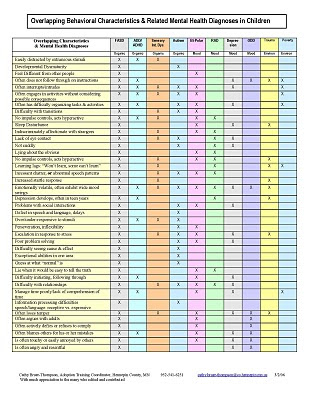 I do have some issues with it.

I thought this was a very interesting chart of the overlapping characteristics of the different diagnoses. Of course I don’t believe it is entirely accurate (for example, it doesn’t include “Difficulty seeing cause & effect “ as a symptom of RAD when it most definitely is a very common one (infants learn cause and effect from their primary caregiver. RAD is caused by the absence of the primary caregiver – whether emotionally or physically. Therefore most texts list this as a common symptom of RAD).

Actually I would guess it depends on when they got RAD. If it was as an infant and the primary caregiver for example did not did not react consistently when they cried (such as sometimes changing their diaper, sometimes ignoring them, sometimes beating them), then I would assume they would not have learned cause and effect. Whereas if they had issues that began later, then hopefully that stage would already be successfully completed.

This was designed by a group with an FASD background, which is fine, and I agree that kids with FASD usually have all of those characteristics (which is why I hope my kids don't have FASD). I just disagree with the fact that they don't have RAD checked off on most of the characteristics. I realize that how RAD effects children is different, and that they may not check things off if the child only acts that way with certain adults (meaning family), but NONE of these were checked for RAD?!!!

Obviously they don't live in MY house. Yes, most of these are checked for Bipolar disorder, and I admit my kids were 10x worse when they weren't taking meds for their bipolar, but they are taking meds for bipolar and therefore the symptoms of it shouldn't be bothering them. Yet they are still actively dealing with all of these, and I believe it is both the RAD and the C-PTSD (trauma).

Kitty and Bear have more than half of the diagnoses on this chart (plus a few more) - *see below.

A friend's family with children who also have multiple diagnoses, works harder on the areas with more check marks. I think this is a great idea, but.

With Kitty we worked first on attachment, but with trauma running a close second. Med wise we’ve been working first on mood stabilization and then ADHD stuff mostly last. Of course the C-PTSD, RAD and cerebral dysrhythmia don’t have meds that help – although the mood stabilizers don’t hurt!


"Life is not the way it's supposed to be.
It's the way it is.
The way you cope with it is what makes the difference."
Posted by marythemom at 10:14 AM