How We Keep Our Marriage Strong! 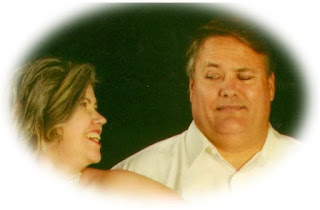 Hubby and I have been married for almost 20 years.  I had a rough childhood (not horrible, but not easy) and knew I had some pretty big men issues when I got married.  Hubby helped me through them and so I felt he would be an amazing dad to attachment challenged kids (not that we knew that's what we were getting!) - surprisingly, it didn't work out that way. He needed a lot of help figuring out how to do therapeutic parenting and his biggest contribution (huge!) was supporting me while I struggled through it.

I think we have a very strong marriage now because he stuck with me through the early years and now I trust him.  We do still struggle with my issues somewhat, but he's super supportive.  A couple of years ago I was diagnosed with an Adult Attachment Disorder, which really surprised me.  This is NOT the same type of attachment disorder that my children have.

One thing that I found helped a LOT was learning each other's Love Language and speaking it!  This is a lot easier when your "love tank" is full.  Which is one reason I find this post about Finding the Joy to be so important.

A basic premise of the book is that women solve problems by talking them through with others (very true of me), and men solve problems by going in their cave, only coming out when they have a solution (right or wrong).  This perfectly described Hubby (who was slightly depressed).  So, feeling guilty for chasing him around and forcing him to talk to me about what is bothering him... I backed off and let Hubby have his time in his cave to work through his troubles.  Problem was, I forgot to tell Hubby (whose primary Love Language is Quality Time), and he thought I didn't love him anymore!!

{Early on in our marriage, I felt Hubby was suffering from depression, but he's an intensely private person and hates taking meds so he would never see a therapist or doctor.  I "tricked" him into seeing a therapist, by having him come with me to support me (I was seeing a therapist to deal with my depression and anxiety - I now know I have mild bipolar disorder.). "My" therapy sessions helped him a little, but obviously couldn't be very intense or he'd have figured it out! ;) }

Effects of Adoption on Our Marriage
Seven years ago, when the kids came to live with us, we didn't know anything about attachment disorders (and weren't told that the kids had RAD - or bipolar or pretty much anything else!).  The kids, especially my son, targeted me, but they hid it from Hubby, who they were afraid of (just because he's big and tends to speak firmly - he's really a teddy bear). This was a HUGE issue for me for a long time. At first, Hubby didn't see the behaviors (they were usually directed at me, the female caregiver and my kids have "Charming" RAD so were highly motivated to hide this type of behavior from everyone).

It took some not so gentle, pointing out that when Hubby didn't back me up, I felt Hubby doubted me, and that he thought I was lying and/ or overreacting. Since my Love Language is Words of Affirmation, not having his approval and support, made me feel drained. It took my therapist reminding him that I'm not a liar and that the kids often lie for him to eventually get to the point where he believed me even though he didn't really see the behaviors happening.


United Front
When Bob and Ponito were little,  occasionally one child would ask me for something, I'd say, "No," and then the child would go to Hubby and ask the same question, hoping for a different answer. We discovered early on that we had to be a united front. If we thought the other parent might not approve then the child was told that no decision would be made until the parents had a chance to talk about it.

All the kids quickly learned we were a united front (even if we disagreed behind closed doors). They also discovered that Hubby and I talked about EVERYthing, and the attempts to triangulate pretty much disappeared.

Generally, Hubby and I agree on a lot of things. Probably the biggest area of dissonance for us is discipline.


Therapeutic Parenting
When Hubby did finally see the kids' behaviors, he wanted to parent the way you would a neurotypical child, which doesn't work with our kids. I tried to show him the research I'd done and the suggestions/ guidelines I'd learned from it, but I think part of the problem was that he realized how structured our lives would have to become and he did NOT want the "warden" role. So he fought me on it, and maybe subconsciously tried to stay in denial.{Structure and Caring Support}

We have had some marriage counseling in recent years, but it tends to be more focused on helping us understand the kids better so we can be on the same page (we don't always agree on what is a child's disability, and therefore out of the child's control, and what is manipulation - I tend to see manipulation in Bear and he tends to see it in Kitty).

Hubby has never done all the reading I have and doesn't have time to attend seminars, but he's willing to listen to me talk about what I'm learning, and he did watch a couple of videos with me.

I've found that if I do a quick summary, hitting the highlights of interesting things I've read recently it works better than handing him something to read or "teaching" him what I've learned as though it's part of a class/ lecture. Usually, I mention things in relation to our kids, for example. Bear did __________ today, and I so wanted to do [typical parenting consequence - grounding, time out, take away something he values...], but based on what I learned about therapeutic parenting from ________, it was suggested that we [therapeutic parenting consequence - add more structure, time in, use these calming techniques until he gets out of fight/ flight/ freeze and gets regulated....].

Hubby usually attends some of the local support group meetings too, although it is definitely not his favorite thing to do. I love that he is willing to do this for me because it is for me that he's doing it, not the kids. Maybe that should bother me, but I'm just happy he cares about our marriage enough to be a part of this.

Daddy Discipline
I finally decided to step back and let Hubby handle discipline for Bear. I hid in the bedroom or bathroom a lot and said things like, "Your dad and I will talk about that when he gets home."

Hubby didn't do things the way I would have, and I couldn't get myself to step back completely, but it helped me to realize that even though Bear's life didn't look like I wanted for him, it wasn't because we didn't do something right or we did something wrong. I reread this post every time I start to feel guilty - You Have Not Failed!

The Biggest Things That Keep Our Marriage Strong:

Prioritizing Yourself, Your Marriage, Your Family as a Whole, and Your Child - In That Order!!
Posted by marythemom at 4:10 PM