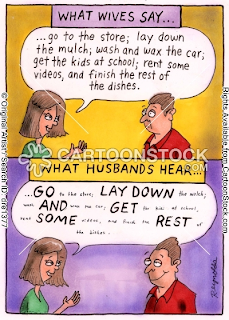 Kitty came home from school very proud of herself because she had "worked everything out" with her VAC teacher and the principal of the special school.  She had arranged to keep her current job at the GAC and the VAC teacher agreed to "try" to find her an afternoon volunteer job (even though that isn't her job), but if she couldn't, then Kitty would be given electives to fill the time slots so she wasn't coming home early.

*sigh*  Knowing that as usual Kitty had heard what she'd wanted to hear the day before, I went ahead and asked Kitty why she'd made this arrangement when it wasn't what we'd talked about.  She insisted (LOUDLY) that my only complaint about next semester's schedule was that she'd be home alone (possibly with Bear) so her solution "solved everything."

Working with someone with such a distorted perception of reality is SOOOO hard!

We continued the "discussion" at therapy.  The therapist correctly pointed out that we were trying to give Kitty facts and logical arguments when Kitty wasn't operating in her logical brain.  The problem is that MOST of the time Kitty is in survival brain. I get that, but what the heck are we supposed to do when what she WANTS  and what she NEEDS are the same in her mind.  When she instinctually responds to everything, and it's usually an automatic "NO!"

I would LOVE to be the nurturer, the one saying, "Poor Baby, is that mean old world being nasty to you?  Don't worry, Mommy loves you and she'll try to make it all better!"

The reality is that children need immunizations, they have to go to school and do homework, and they can't have cheesecake and ice cream for every meal.  Normally you can palm off most of the "blame" on the doctors and school boards... even nutritionists. Instead, I'm the only one who gives a crap about what happens to my child long-term.  No one else is willing to be the "bad guy" who gives my child consequences, to take the difficult task of teaching her the skills and techniques she needs for real life,  and give reality checks/ tell her like it is, ...so that I can be the "nurturing protector." Instead, everyone else gets to have that job!  She has a 100 people getting to give her warm fuzzies, telling her the world is full of sunshine, lollipops and rainbows, and she can do anything... leaving me with the crappy job of having to force her to face the real world so she'll at least try to gain the skills and knowledge she'll need to have a life in the real world.

With most kids you can introduce reality in small doses; natural consequences helps them figure things out on their own; others gently (or not so gently) let them know that a career as a rock singer is unlikely because they can't carry a tune to save their lives; they have poor science grades, and so realize that neurosurgery might not be a good choice...  Subtlety and natural consequences don't work with Bear and Kitty.  They see the world  through a distorted perspective - They are told they are totally normal and their warped view of the world is constantly being reinforced by others (the few people who disagree with their version of reality are "mean" and trying to make the child mad or kill their dreams), add to that Kitty's emotional reactivity, distorted perception of reality, oppositional defiance, intimate relationship issues, mix in the fact that we're running out of time to access services...  I don't feel we have the luxury of letting her live in this fantasy world.

I feel like we often made this mistake with Bear - letting him believe what he wanted to believe (that he could and would do ANYthing).  That's all great, but without someone hitting him over the head with reality so he would accept some practical help... he ended up with a lot of unattainable and broken dreams and his reality check came with years in prison and a criminal record for life.

After a lot of tears, yelling and even a threat to move out (first one in years!)... Kitty finally heard something she wanted to hear - a "compromise" she could live with.

This time we wrote down the compromises we'd agreed to so that she wouldn't remember it incorrectly:

My theory is that she'll only remember that we said she could work at GAC.

The therapist also had her agree that I could write:

It's interesting that she does not want to stop working at GAC, even though it is a stressful environment for her. What's the appeal?

Also, you've mentioned that she isolates in her room with her iPod a lot. What about making a rule that her iPod stays out of her bedroom and she has to use it in an area like the living room instead? Just trying think of some creative ways you might motivate her to spend more time with family.

There are several appeals to GAC:
* She grew up in a chaotic environment - it feels normal to her, even though the stress triggers her. It's very common for kids of trauma to like scary, gory, adrenaline-pumping...
* It's familiar. Kitty HATES change!!!! One reason I wanted to push the school to help her find another job was that I knew that without the push, she would stay frozen there forever. Another reason I'm pretty sure she'll never actually move out. She claims she wants change, but it terrifies her.
* Everyone there tells her she's a typical teen and there are not a lot of expectations or criticisms (real or perceived).

I like the idea of restricting where she can use the iPod, and we've actually tried a variation of this. Her biggest complaint is that she uses it for music to fall asleep and as one of her alarm clocks to wake up (one that she's less tempted to throw). She has alternatives (CD player alarm clock) though. Hmmmm....

Everyone deserves some alone time every once in a while. Why should Kitty be any different? Would you not like her to have any time to herself? A normal person can have the odd bout of alone time without it harming them. I know that she spends a lot of time away from you, but what's the big deal about her being with you practically all the time? If the others can have their own space, why can't she?

I see. But still, it'll be up to her, at least to some extent, when she wants to spend that one on one time with you. You can't punish someone for refusing to be with you the minute you may want them to be, especially if they're an adult and you can't legally force them to. Maybe if you compromised with her and spent those one or two hours with her doing something SHE enjoyed, she might be more agreeable to it. It may not be something you enjoy, like watching Annoying Orange with her, but if it entertains her and makes her more willing to be around you, I'd say it's worth a try. Or maybe you could break up the one or two hours of time with her and have small amounts of time with her throughout the week, so she doesn't feel forced to be with you at a set time for a set amount of time. I understand that you're hoping that her reactions to the addition of this new "stressor" will show others that she needs more services, and I think that that's a good quest to pursue--getting her the help she needs. But I also know that she may not be in favor of this new arrangement and may resist if she feels forced into it. Just something to think about.