I did a year in review blog post in 2008 that had a nice format so I thought I'd do it again (in 2012) and compare it to that year's answers..  I think the comparisons and contrasts are pretty interesting!
Now it's 2016, and I realize the year is not over yet, but I feel like I won't remember to do it in January 2017.  1. What did you do in 2008 that you’d never done before?2008 - Adopted 2 children. Started a blog.2012 - Had a child move out and go to jail.  Looked into legal guardianship for second child.  Stopped blogging (although I started again).2016 - Had only one child still a teen. Started a job working 60 to 80 hours a week.2. Did you keep your New Years’ resolutions, and will you make more for next year?2008 - I didn’t really make a New Year’s resolution last year, but if I had it would have been to lose weight and get more exercise. So No, I did not keep my resolution. This year my resolution will be to spend more time with my kids and lose my “baby weight” and get more exercise.2012 - I don't make resolutions anymore, but I do Jesus' gifts now.  This is this year's gift.  Last year's gift was to be present and consistent with my family and take better care of myself.  I think I've been more present, now I'm working on being more positive.  In fact, that's my word for the year:  POSITIVE.
2016 - I still don't make New Year's Resolutions, but I do see myself as a pretty positive person now. I feel like I've survived the worst of it and am to a point where I can give back. 3. Did anyone close to you give birth?2008 - I had a bouncing 12 year old girl and a bouncing 14 year old boy!2012 - My 17yo niece had a baby, and the state took custody of him.  We thought for a short period of time we might end up with custody.  Most of my friends are in the "transition" phase with their children moving into adulthood rather than adding to their family.
2016 - Same niece is pregnant again, but hopefully in a better place in her life. I'm still not a grandma yet, and I'm grateful for that. Of course that could just be that Bear was only out of prison 4 months before he went back in. I still worry about Kitty, but she seems to know she's not ready yet.4. Did anyone close to you die?2008 - One of our kitties, Lady Moonlight, passed away.2012 - Our old Husky, Scarlett Claus, passed away this Summer.2016 - My mom died from ALS in 2014 and while I'm healing from that it still effects me, especially when I see people fall down (which happens around me more often than you would think). 5. What countries did you visit?2008 - I didn’t leave the country, but I visited many different states. The states of Chaos, Confusion, and Disorder. I visited Hell, Insanity and Terror and decided I didn’t want to live there.2012 - I didn't leave the country this year, but I learned a lot about different cultures.  Residential treatment, jail and the legal system, and got to know more about the kids' biofamilies who live a very different life than we do.2016 - Didn't leave the country this year either, but Bob did a semester in London (and visited Scotland, Wales, and Italy) and I Skyped her at least once or twice a week, so I almost felt like I was there.
6. What would you like to have in 2009 that you lacked in 2008?2008 - Money, sleep, peace of mind, a stronger faith, calmness and wisdom.2012 - That pretty much sums it up!2016 - Money, sleep, more time with Bob (the only kid not mad at me all the time) and Hubby, to figure out what's going on with Ponito and help him. 7. What dates from 2008 will remain etched upon your memory? 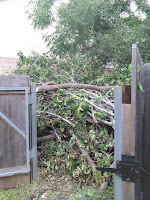 I stripped and cleaned Kitty's room. Cut down a ton of trees. Survived a tree attacking me without breaking anything. Painted the interior of the entire house (which is huge by the way). Fought insurance companies and won (mostly). And stained all the kitchen and bathroom cabinets  (tetris style) 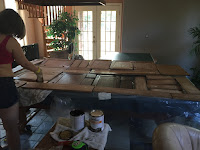 9. What was your biggest failure?2008 - My weight, and not living up to Hubby’s expectations of me at work.2012 - Honestly I can't think of a big failure. I can think of many things that didn't go the way I wanted them to, but I did the best I could and I accomplished a lot. 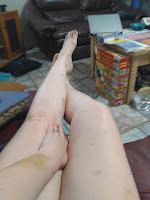 2016 - I couldn't figure out how to help Ponito and I hate watching him struggle. I wanted to help Kitty accept her limitations and figure out how to be happy instead of avoiding change.10. Did you suffer illness or injury?2008 - This year I was diagnosed with bipolar disorder and the doctor is worried about my thyroid.Bear separated his collarbone.Kitty was tentatively diagnosed with bipolar disorder.2012 - I was diagnosed with an adult attachment disorder and started medication for my high cholesterol.  Got my thyroid tested and the potentially cancerous nodes have shrunk and no longer need surgical testing!Bear broke his hand, twice.Kitty was diagnosed with emerging Borderline Personality Disorder.
2016 - Did I mention I survived Extreme Landscaping? I am struggling with some issues related to stress and sitting at my computer 15+ hours a day.11. What was the best thing you bought?2008 - Until he was let go, I was loving the great deals we were getting from one of the guys at Salvation Army. Bags of clothes for $2-4. It was a life saver.

2012 - My boots!  I still get at least one compliment EVERY time I wear them.2016 - My little blue Prius (although technically I guess that was last year). This year I paid for a new laptop with my own money instead of "family funds." I'm especially proud of the fact that I set it up almost all by myself.


40. Quote a song lyric that sums up your year?2008 - AnywayMartina McBride/Brad Warren/Brett WarrenYou can spend your whole life buildin'Somethin' from nothin'One storm can come and blow it all awayBuild it anywayYou can chase a dreamThat seems so out of reachAnd you know it might not ever come your wayDream it anyway(Chorus)God is great, but sometimes life ain't goodWhen I pray it doesn't always turn out like I think it shouldBut I do it anywayI do it anywayThis world's gone crazy and it's hard to believeThat tomorrow will be better than todayBelieve it anywayYou can love someone with all your heartFor all the right reasonsAnd in a moment they can choose to walk awayLove 'em anyway(Repeat Chorus)You can pour your soul out singin'A song you believe inThat tomorrow they'll forget you ever sangSing it anywayYeah sing it anywayI singI dreamI love anyway2012 -  http://www.youtube.com/watch?v=Ltp5QoyuUeEThis is Real, This meI'm exactly where I'm suppose to be nowlet the light shine on meI found who I amThere's no way to hold it inNo more hiding who I want to beThis is me