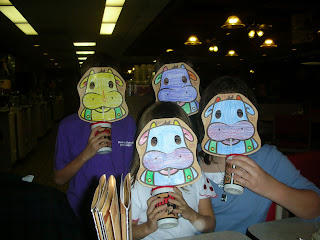 I rarely blog about my adopted children on here any more. Mostly because Kitty (22) and Bear (24) are now out of the house, although Kitty will probably be moving back home in the next 6 months or so.

So I'm going to talk about Bob and Ponito. If you just started reading my blog, then here's a brief summary. Bob (21) and Ponito (18) -- obviously not their real names-- were 7 (bioson, Ponito) and 10 (biodaughter, Bob - if you want to know how she got the name, Bob, click here) when Bear (13) and Kitty (11) joined our family. Kitty and Bob were in the same grade at school and there were a LOT of clashes between the 2 girls.

Bear was a very squeaky wheel, and it wasn't until he went into residential treatment at 14 that we realized how loudly Kitty was squeaking too. Between the two of them, I'm afraid all other squeaks were pretty much tuned out.

Bob was the next squeakiest. I'm pretty sure she still struggles with not getting all her needs met after the adoption, and I'm also pretty sure it's why she's such a strong, independent, young woman.

Ponito didn't squeak at all.

Bob is starting her 4th year of college and just turned 21 - no longer a teenager. She's an amazing young woman now. All those years of her making me crazy and pushing my buttons, living with  severely mentally ill siblings, being incredibly smart and incredibly stubborn... have turned her into a strong, capable, responsible young woman.

Bob's finally stopped pushing me away, and we have a pretty good relationship. I probably talk to her a little too much about what's going on with her siblings and asking for her advice, especially with Ponito.

She tends to be pretty honest with me about her opinions, whether they hurt my feelings or not. I know that's a good thing, but of course it still hurts to hear her say that she understands how Ponito is feeling and that she too wanted to leave home the minute she graduated high school.

I know this is a normal developmental stage. Teens are supposed to be working on becoming independent from their parents, and pushing their parents away at this time is developmentally appropriate. I did it too. It wasn't until my mid to late twenties, that I started going back to my mom for advice and support. I remind myself of this every day. It still hurts.

Ponito was always a sensitive, laid-back, little kid. In a family of strong female personalities, he took after his dad. His Love Language was obviously Physical Touch, and he was always climbing in our laps, or plopping himself down between Hubby and I. 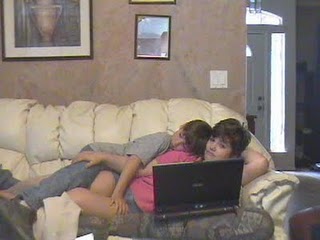 Ponito was very active, incredibly coordinated, and social. When we weren't calling him Monkey, we called him the Energizer Bunny. In 7th grade, he was in band, football, soccer, drama class, and had an adorable, little girlfriend (I say little, because she was petite). At 5'5" and thin as a rail like the rest of the boys in my family, we encouraged him toward soccer rather than football, He loved soccer and it came easily to him, but he never had a real drive to win.

Then things started changing. In 7th grade, he started failing classes. He seemed to just stop caring. He started getting stomach aches (after years of specialists, we finally figured out it was most likely anxiety - Prozac helped a lot, but quickly thereafter, he refuse to take it). When it came to makeup work, he wouldn't ask for assignments and wouldn't do them when he got them (he said he didn't understand them, but he wouldn't ask for help).

When he started high school, Ponito dropped out of band and football (which made sense as he was going to need more time for academics with his advanced math classes). Within a year, he had dropped out of soccer and all extracurricular activities too. Starting in 8th grade, he did little besides play on his gaming system (unfortunately, Hubby and I couldn't come to an agreement on how to handle this, so he was pretty much able to play anytime he wanted - which was all the time).

At the end of junior year, I finally talked Hubby into getting him a psych eval. We'd tried several therapists and even a few anti-depressants, anti-anxiety meds, and ADHD meds. Some of them worked, but he quickly refused to take them.

We'd always known he was smart, but the academic part of the psych eval was even better than expected. In math, he tested post-graduate level (from college!), in English, college level. He was also diagnosed ADD with almost no "general fund of acquired knowledge."

His other diagnosis was Adjustment Disorder with Depressed Mood. According to Ponito's therapist, this is kind of a junk drawer diagnosis for "we have no idea what it is, but something is obviously wrong." The therapist recommended DBT therapy, but that Ponito had to "buy into it," which wasn't going to happen. So we agreed to stop therapy.

Now a high school graduate, Ponito plans to go to college out of state. He found one that was willing to accept him, despite his abysmal GPA. He spent the whole summer on his PS4 all night, and sleeping all day. I pretty much despair that he'll do well in college and end up dropping out, but who knows? He may surprise me.

My hope is that this is that independence phase, and that when Ponito is in his 20s, he'll come back to the family and get his act together. I do still think there's something fundamentally wrong (mental health wise), but I've never been able to figure out what or how to help him.

I will always feel a little guilty that we didn't catch the ADD sooner, but like Kitty's issues were hidden because they were overshadowed by Bear's, Ponito, my least squeaky wheel, was overshadowed by them all.

Our adopted kids' issues meant they were emotionally and developmentally delayed in a lot of ways (like most kids with trauma issues). The younger biokids quickly "passed them up" and were able to do and handle things that their siblings couldn't. Because the girls were basically twinned (in the same grade), the differences were usually VERY obvious which caused a lot of extra issues.

For example, both my biokids are now able to drive. My adopted daughter is not. In her mind, the fact that I won't let her drive is because I "love them more." Of course, the facts are that she is easily distracted, has difficulty with processing her environment, can't multitask, frequently has issues with esophoria (eyes crossing when she's tired or stressed),..

The adopted kids resented that Ponito was getting to have the happy childhood they didn't, and we had to protect him from their sabotaging that. I'm 95% positive our adopted kids were doing it subconsciously, but they actively made his life miserable whenever they could. Since he was younger and smaller, he needed more protection than our biodaughter. He was a very laid-back little guy, and as the least squeaky wheel, I now realize he got a lot less attention than he needed/ deserved.

Helping Siblings Cope with the Child of Trauma Not Having Consequences

It was difficult for the other kids to understand why Kitty and Bear rarely had consequences for their "bad" behavior (they cussed, lied, stole things, hit and bit, broke things...). When they complained it wasn't "fair" (which was rare once we started the FAIR Club), we mentioned that they didn't always see the consequences, but that didn't mean they didn't get them (True! Having to live life like this is a consequence all it's own - The adopted kids had a lot more Structure).

To help the biokids understand their adopted siblings' differences, we tried to give them examples and explanations (at their age level).

We also had to explain that if any of our children teased or triggered their sibling, especially if they triggered him/her on purpose, then THEY would be the one getting in trouble.

The biokids did try mimicking siblings behavior, and we had to squelch it pretty hard. They wanted to see if they could get away with it too. They usually only tried it once or twice before they "got" that our expectations of them were different. We held them to a higher standard that was age-appropriate for them.


Would We Do This Again?

There were some advantages -


There were also some disadvantages -

Do the Kids Wish We Hadn't Adopted?
Yes.