He's such a cute kid. I know he is occasionally a little stinker, but he's also my cuddler. My quiet, sensitive child. Always easy going and laid back. Bob was my difficult child. She hit the terrible twos at seventeen months and didn't stop until 4.5yr! She picked on her little brother all the time (and he usually just took it from her stoically). At age 8 she got a teenage attitude and it's been on ever since.

But Ponito was the one I sometimes forgot was there. The one who sweetly played dolls and dress up with his sister and walked around with a big pink babydoll for a year and a half.

When Bear got here and Ponito started picking up Bear's behavior it really bothered me. When Bear left for residential treatment, I was a little grateful for the chance to get Ponito back on an even keel. I knew Ponito had picked up some not so hot behaviors (like cussing) from some of the neighbor kids too, but he was careful not to do so in front of Hubby and I.

This finally backfired on Ponito though. One of the neighbor kids started using words he'd learned from Ponito. Then this weekend his older brother (13) started teasing Bear's new girlfriend until she started cussing. When the older brother told his parents, he conveniently left out the teasing and other behavior that he and his brother had been doing.

That was it. Now this whole neighbor family with 4 kids, including a son who is only 3 weeks younger than Ponito, is not allowed to play with our family. Ponito's belated birthday party is this weekend, and his friend can't come.

I've been avoiding forbidding Ponito to play with the neighbor child who is the worst offender (aggressive, cusses like a sailor...), because the boy's mom is a good friend of mine, and they are always taking Ponito, and often all 4 of my kids, on great trips that we can't afford (6 Flags, Schlitterbahn water park, circuses, rodeos...). This boy is only 2 weeks older than Ponito, they've known each other since they were a year old and were even in the same Kindergarten class at school (I think the school deliberately kept them in different classes after that!). I don't want Ponito to feel like I'm condoning the boy's behavior, at the same time I know how hard it is for this boy (many of the neighbors have forbidden him to play with their kids). *sigh*


Cursing is one of the things I don't tolerate much. In our house we also have "No No" words aka "Naughty" words. Things like shut up, hate, stupid... I grew up with a Mom who was strict about that kind of thing. She didn't allow variations on cursing either; we weren't allowed to say, "Gah," or d*ng, or d*rn, or cr*p... Hubby thinks I'm going too far. When we adopted, we expected the kids to come with a whole different vocabulary, but I was actually fairly impressed. 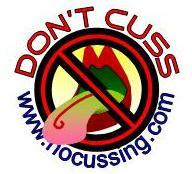 So I may have found the answer. Ponito is in the FAIR Club for cussing, both for what happened with the neighbor child and in front of his Grandmother. His assignment is to join the No Cussing Club (http://www.nocussing.com/home.html ), read the book, use his allowance to buy wrist bands and possibly start his own local chapter of the club. The No Cussing Club was started by a kid whose parents wrote Raising G rated children in an X rated World. Ponito loved the rap video the kid made. Listen Now [4 min 31 sec] add to playlist 'Don't Cuss' Video (YouTube)

I've hinted that if he asks both neighbor boys to join his club, this might impress the neighbor family enough to lift the ban forbidding contact, if the other child refuses to join, then he has an easy excuse for stopping contact with that child. If the child joins and doesn't quit the cussing then Ponito will have to let the child know his behavior is not OK and possibly kick him out of the No Cussing Club - in which case he won't be allowed to have contact with the child. It's a win/win situation for Ponito.

One of the things the No Cussing Club recommends is for awhile you need "transition" words to help you stop. 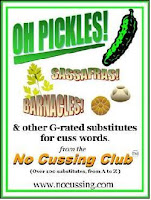 “You know, when you first try to stop cussing, you can't stop right away. You got to have transition words or substitutes to help you stop. You can use 'oh, pickles,' 'sassafras,' 'dang,' 'darn,' 'flip' — just anything you can think of.”

"WARNING! Using these words instead may actually cause you to burst out laughing and actually defuse your anger and the situation."

Posted by marythemom at 9:35 PM

Email ThisBlogThis!Share to TwitterShare to FacebookShare to Pinterest
Labels: cussing

I love this idea! I've never even heard of it.