Just found out on Friday that because we adopted a child (children actually) from the state of Nebraska where you are considered an adult when you turn 19 (versus when you turn 18 like in Texas), we are considered legally responsible for Bear and Kitty until they are 19, regardless of Texas state laws. We signed a contract stating this.

This means that if Bear moves out, even though he's 18, we are still expected to report him as a runaway. If he gets into trouble (steals and wrecks a car for example), we are still legally liable. If he moves in with his grandparents, they would have to assume legal guardianship of some sort if we don't want to be held legally liable.

It took me quite awhile to process this.

I assumed it would take Bear quite awhile to process it too, but I wanted to tell him ASAP. We told him in therapy today (Saturday).
When the therapy session was almost through and we were talking about how far Bear had come and how he was making progress in building trust and bonding to us as his family (but how he didn't like to talk about his feelings), I thought it was time to bring up the news.

"Bear, you know how a few weeks ago we were talking about how you have this belief that when you reach legal age you have to move out, and when you thought that legal age was 17 you started separating from us emotionally and pushing us away to get ready for moving out? Then you found out the legal age was 18 and you decided to stay. We started talking about insurance and what would happen to your Medicaid when you moved out at 18 so I contacted Nebraska to ask them how that would work.

Yesterday I got a call and was told that because you were adopted from Nebraska, your legal age is 19, even though you live in Texas. You are a special because you are a Nebraska kid. We wanted you to stay anyway because we love you, and we made a commitment to you forever, but we also made a legal contract with the state of Nebraska that you would stay with us until you turn 19.

{Later, Hubby said he wondered why I was taking so long to work up to telling Bear, but I explained that I wanted Bear to see this as "his idea." If Bear feels you're telling him he has to do something, or he can't do something then he will fight you to do the death, but if I could present this in a non-confrontational way then he might be more accepting and want to make it work.}

Then I got my second shock. Bear was totally blase about it (so maybe my way of telling him worked), and started talking about how now he could play football for his high school and because he would be on the team they would win next year.

So... we have our son for another year and a half. 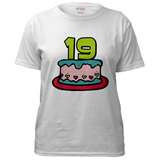 very few kids are adult at 18 anyway. Good for bear!

But if he left your home, would any police officer or court (Texan or otherwise), actually force him back to your home, just because you signed a paper with Nebraska saying you're on the hook until he's 19? I know you want him to stay with you until he's ready to move on, but I seriously doubt a Texas court would hold you liable for actions that Bear committed when he's a legal adult under state law. Just something to think about...

r. - I don't pretend to know much about the legal system (we've avoided it as much as Bear lets us), but I make 2 assumptions here.
1. No, the police won't haul him home if he runs away after age 18, but they probably weren't going to do that after he turned 17 either. However, he will continue to receive Medicaid benefits and we will continue to receive an adoption subsidy for him after age 18 so we would need to report that he's moved out, and anyone he lives with (especially his grandparents in Nebraska) would have to get some kind of legal documentation in order to keep his benefits like Medicaid. Medicaid is important because he takes over $1000/mo of meds.
2. Legally I think we could be held liable for Bear's actions. For criminal behaviors he is already considered an adult, so if he stole a car or robbed a bank, he would go to jail and we would probably be out of it. However, I think our concern would be more on the civil side. If he destroyed property, then we could be sued by the property owners. If he fathers a child we can be held accountable for child support. Stuff like that.

Wow. Amazing how these things happen. I know I don't know your family other than via this blog, but it sure sounds like an answer to prayer...God was in the details from the beginning. Glad Bear was blase about it. :-)

Wow, that is amazing. I hope he will continue to think of himself as needing to stay and that is a good thing.

I hope he uses this year to his advantage! That he can mature and learn to trust and love given that extra time.