Bear called yesterday, pretty much in shock.  He said he got a visit from his biodad recently, and the biodad didn't know he was in jail.  Biodad also told Bear that he'd been clean and sober for the the last 7 months for the first time in many, many years.  He blamed the drug use for not adopting Bear and Kitty when they went up for adoption 7 years ago.  He told Bear he was now ready to be part of Bear's life and was bringing Bear's 1/2 sister to visit next time (Biodad has custody of 2 of Bear's 1/2 siblings - something that I know hurts Bear as much as Biomom keeping his younger half sisters but not him).

Bear  has always been very vulnerable to biofamily rejection.  He craves love and acceptance, but doesn't know how to maintain a relationship.  His black and white thinking puts people on a pedestal or throws them into the pit.  Nothing in between.  Because he doesn't live with shades of grey, and, of course, real people are never perfect... Bear sees someone as perfect, until he perceives that someone is rejecting him (which can just be asking him not to call as often, or telling him they want to spend some time alone), then he pushes them away before they can hurt him.  Hence, Kleenex Girls. I've never heard why Bear's foster dad refused to keep in touch with Bear, beyond the contact we begged for in the first few months of Bear's placement with us, but I have to assume it was something similar.  Kitty still has the occasional conversation with her former foster mom.

Although they've never lived together, Biodad has been in and out of Bear's life quite a bit.  Usually what happens is Biodad accepts Bear's attempt at contact, and then Bear texts and calls obsessively, ignoring the Biodad's requests for moderation (like that Bear not call during work hours).  If Bear doesn't get an answer immediately, he calls back every two minutes until the call is answered.  At one point Biodad called Hubby and I, asking us to stop Bear from doing this.  Eventually Biodad shuts it all down and disappears, leaving Bear to feel rejected yet again.  Until the next time.

Bear is extremely depressed and vulnerable right now.  It would not surprise me if Biodad ends up back on the pedestal with all issues forgotten.  Bear might even try to stay in Oklahoma (where Biodad lives) when he gets out... until the inevitable, and Bear "has to" run again. 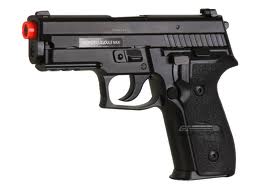 I finally steeled myself to open the bags that Bear had left hidden in the dog house for months before we discovered them.  Could have been worse I suppose.  It was mostly graduation stuff, some really stinky clothes, a ton of empty bullet casings!, some empty deodorants, fish bait, cologne, and a loaded altered air gun (similar to the picture, but with the red plastic removed, VERY realistic looking).

Ironically the friend helping me deal with the contents of the bags is the same friend whose son had given Bear an air gun that looked almost identical to this one to "fix."  Bear had popped off the red plastic part that identified it as a toy, and brought it to school to trade for drugs.  I hate the thought of this realistic toy being in my home or in Bear's hands (easy way to get himself shot, because it looks so real), so I decided to give it to my friend's son to replace the one stolen by Bear all those years ago.  It felt like an ideal solution!

Are you going to give your friend's son the gun with the red plastic part broken off? What if he displays it where someone mistakes it for a real gun?

Oops! Friend's son is 24 years old, and not generally the kind of kid who gets into trouble of that sort. He had no idea that Bear would steal the original gun, and believed Bear when he said he could fix it and would return it.