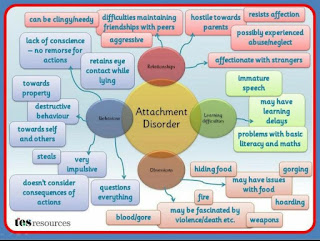 The way the world looks at Reactive Attachment Disorder (RAD) has changed over the years. Parents are often told that it is "rare" and most diagnosticians are reluctant to diagnose. The reality is that while it may be rare in the general population, for those of us dealing with adopted and foster children, it is far less "rare" and I would say, it is common.

DSM-5
The Diagnostic and Statistical Manual of Mental Disorders, 5th Edition has changed the definition of RAD. While Reactive Attachment Disorder (RAD) still exists, it is now used to describe "Inhibited RAD." What used to be called "Disinhibited RAD" is now called Disinhibited Social Engagement Disorder (DSED).  {More info below}


So What Do You Look For? A List for Recognizing Trauma & Attachment Issues
by Beyond Trauma and Attachment and  Dr. Arthur Becker-Weidman

The following list of often-experienced behaviors of traumatized adopted children was developed by Dr. Arthur Becker Weidman, Ph.d.  He has studied attachment and complex trauma especially in children who were adopted after the age of 18 months.  If you are an adoptive or foster parent and you can check off more than a few of the characteristics on this list, you may have a child with attachment and/or complex trauma issues.

{Marythemom--I do not agree with everything in this video - particularly his claim that EVERY adopted child has RAD. I do believe that every foster/ adopted child has experienced trauma of some sort - just being adopted or in foster care means that there has been a traumatic break from the birth family)}

Attachment Disorders and Post Traumatic Stress Disorder should be viewed on a continuum.

Reactive Attachment Disorder is usually associated with some form of abuse or neglect in the first two to three years of life. This normally involves physical or emotional abuse, abandonment, a drug-addicted caregiver, a sequence of foster placements, or similar emotional trauma. In some cases, children may have symptoms of an attachment disorder if they have experienced divorce, long periods of hospitalization, a parent with chronic depression, or if their brains were altered by the mother's substance abuse.

The most common factor for children with attachment disorders is that in the critical first years of life, either the child did not have the opportunity to bond emotionally with any single individual and maintain that bond, or the child did experience an emotional attachment and then was separated from the caregiver. ~  Strategies for Classroom Teachers of Students with Reactive Attachment Disorder


According to the DSM IV-TR, There are two types of Reactive Attachment Disorder:

Trauma Triggers
A child whose past trauma is triggered will likely exhibit several of these signs at one time, and they may be even more exaggerated than usual.  Kids can be triggered by sights (violent TV shows, someone who looks like a past abuser, a situation that reminds them of a traumatic event), smells (fried potatoes), sounds (a full laundry basket falling to the ground, a siren, a fire alarm at school, or a loud/sharp yell), and sensory feelings (a certain touch, a particular fabric, cold weather).


Female Caregivers (the "Nurturing Enemy")
A common defense mechanism for our kids is to try to leave before what they believe is their "inevitable" abandonment by us. Attachment and people loving them is scary. Especially love from the female caregivers - they push us away the hardest of all. They try to move on before things get emotional. Demanding that they want to be put into a new family, foster care, group home... somewhere else, where everything will be "better."

“Nurturing Enemy” - Our kids tend to behave differently (usually worse) with the female caregiver. In their mind, the mother is the person that hurt them the most, that can hurt them the most. They turn their hatred and loss they feel towards their birth mothers abandonment and abuse toward us.

Even though we have never hurt them (and never would!), sometimes they get stuck in the past. Often with my kids, it was because things that happened to them before they came to us, got their feelings and the events of their childhood mixed up with me as their mother figure. I know some kids talk about things that they remember having happened to them as a child, as though it had happened recently.


Another thing about their issues with mothers is that we're almost always the ones "forcing" them to deal with attachment and feelings,

Why Does My Child Act Differently With Everyone Else?

Although sharing this etiological pathway, the two disorders differ in important ways.

Because of dampened positive affect (ex. they don't show their feelings with body language), Reactive Attachment Disorder more closely resembles internalizing disorders; it is essentially equivalent to a lack of or incompletely formed preferred attachments to caregiving adults.

In contrast, Disinhibited Social Engagement Disorder more closely resembles ADHD; it may occur in children who do not necessarily lack attachments and may have established or even secure attachments.

The two disorders differ in other important ways, including correlates, course, and response to intervention, and for these reasons are considered separate disorders.

Disinhibited Social Engagement Disorder - DSM V
A. A pattern of behavior in which a child actively approaches and interacts with unfamiliar adults and exhibits at least two of the following:

B. The behaviors in Criterion A are not limited to impulsivity (as in Attention-Deficit/Hyperactivity Disorder) but include socially disinhibited behavior.

C. The child has exhibited a pattern of extremes of insufficient care as evidenced by at least one of the following:

E. The child has a developmental age of at least nine months.

Specify if Persistent: The disorder has been present for more than 12 months.

Specify current severity: Disinhibited Social Engagement Disorder is specified as severe when a child exhibits all symptoms of the disorder, with each symptom manifesting at relatively high levels.

Where can I go for help, support, or to learn more about parenting a child with RAD?
My Top 10ish Things I Couldn't Do This Without
Parenting Attachment-Challenged Children and other Facebook groups!
Christine Moers