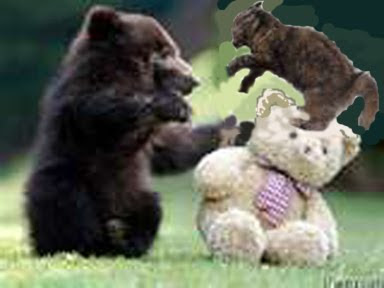 I sent out this e-mail on May 8th:

Bear has been crying and moody a lot lately (both at home and at school) and isn’t sleeping again. He says he is upset about his sister’s issues and girlfriend trouble, and “everything.” He seems very depressed and I’m a little worried. Also, he’s still "fidgeting,"{when Bear's meds are not right he gets what we call "twitchy" - uncontrollable body movements, including adjusting his shoulders like he's trying to
"settle in" to his chair continuously, can't keep his hands still...}, but it’s not as bad as it was.

Over a week later I received this e-mail:

{Kitty's skills trainer} and I have discussed your email and wondered if you would be interested in having a family meeting (Bear and Kitty and whomever else you think is being affected by the current situation) as well as {Kitty's skills trainer} and myself. It seems that with all of us present it would allow us to be on the same page and hopefully with clear direction as to what we can hope for with the upcoming summer.

The next evening was the "Sock it to Stigma" support meeting and both skills trainers were there. I told them both that while I think Bear would benefit from this, and we've discussed doing it in therapy, we had decided that Kitty was not ready. I mentioned to Bear's skills trainer that in addition to all the other reasons we had, Kitty had only met her skills trainer 3 times so I did not feel they had established enough of a relationship to help Kitty feel safe.

The next day, Kitty's skills trainer met us for Kitty's weekly skills training session (which I'm considering dropping, or at least not allowing the trainer to meet with Kitty alone, because the trainer has unrealistic goals and keeps getting Kitty wound up with entitlement expectations that make her angry and resentful. After meeting with Kitty, the trainer tried to talk me into letting the meeting with Bear et al go forward.

These are the reasons I gave her for saying no:

I do want to have a meeting with Bear’s therapist this weekend, but instead of bringing Kitty, I want to bring Grandma. In talking with Grandma I believe we’re missing a lot of what’s going on when we (the parents) aren’t around. He is a lot more intimidating and threatening to women and kids, especially when he believes he’s unsupervised. This really concerns me in that I think this will really effect his future employment, I would like to be able to leave him unsupervised at some point in his future, and I’d REALLY like to address this during this last year we have with him as a “child.” Also while we have a few months left with the skills trainer who can provide yet another opportunity and perspective to helping him learn how to handle this appropriately.

I am impressed by your insight into your children and how you advocate for them. I'm also impressed that your therapists want to work collaboratively, however misguided. This is something we have yet to get. Seems our kids professionals tend to work in a vacuum. Good luck with your meeting.

Mary: I worry sometimes that you try too hard to get others to not just agree to what you feel is best, but for them to understand ("buy into it"). For people like the skills trainer who aren't likely to be in your lives for much longer, I think just this one part was needed:
"This is something that needs to be addressed in therapy! With skilled therapists who know the kids, know the history, and know the parents." If there is resistance past that point, you can say "If you knew the history, you wouldn't be asking for this. And since you are asking for it, you prove my point about not knowing the kids' history!"

On the subject of Bear's meds, on the one hand I'd say it is worth looking at increasing his anti-seizure med (even if it isn't used for that purpose). Did he recently switch from name-brand to generic? On the other hand, just this morning I was wondering how much of Bear's insomnia is caused by that same med.