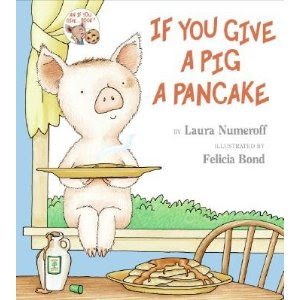 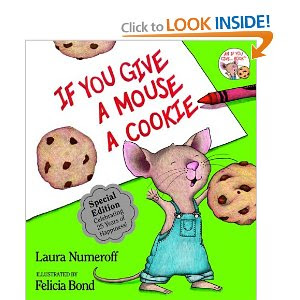 Ever read the book "If You Give a Mouse a Cookie" or "If you Give a Pig a Pancake"? That's me. The premise is that if you give the animal something, like a pancake, then he'll want something to go with it, like syrup, and while he's looking for whatever it is he wants, then he gets distracted by something else, and so on until the house is trashed with unfinished projects and the pig is hungry again... for pancakes. Aka "But First" Syndrome.
A few months ago, our front door knob broke and I found one on clearance (woo hoo!) that mostly fit, but the back brackets covered different areas so there were bare spots without paint.

It took me awhile, but I finally got the primer out and primed the front door... and some spots where the paint had chipped off the wooden door frame, and under the kitchen sink to cover the stain from a leak in the garbage disposal...

Meanwhile some of the paint on the inside of the door had bubbled and chipped off. The house is 17 years old.

So it took me awhile, but I bought a little can of front door paint in a pretty forest green, and bought a quart of paint that I thought might match the inside paint color for the door. While I was at the store, I found a little Oops touch up paint sample that looked white and glossy and I thought would be good for painting under the sink.

I let Bob paint the door, and it took several layers to cover the white primer, but I finally got the front door painted a dark green. Unfortunately she also dripped it all over the cream door frame too.

Then I discovered that the Oops paint was the EXACT color of the inside of the front door. *SCORE!* So I found a little piece of leftover sandpaper to smooth around the edges of the chips (and also used it to take off most of the splashes of green on the outside frame), and started wiping with a wet rag and some good cleaner... and then realized that ALL the doors(12), window frames(16), baseboards(7 rooms), pantry shelves(only did 4), and railings (only done the downstairs spindles so far) in the house were the exact same color AND really filthy.

So I scrubbed, wiped, and used my finger to apply touch up paint to the whole house... well downstairs anyway. I figured while I was there with the cleaning supplies... I might as well start cleaning walls and light switches...

The next day I bought some wood cleaner and started attacking wood surfaces like the stair rails. I'm making the kids crazy because I'm constantly looking at surfaces that I normally ignore. Hubby is confused and wondering who is coming to visit.

I decided to save the remaining Oops paint for future touch up needs, but still needed to paint under the kitchen sink (by this point, the cleaning supplies normally stored under the sink had been sitting on the floor in front of the sink for weeks!). So I used the quart of paint I'd bought that I had originally planned for the front door. Kitty had been begging to paint the front porch (she wants the money to pay for tickets to the Harry Potter movie), but I didn't feel she could be neat enough (Bob who I trusted, had made a mess).

Remind me to tell y'all how the new chore plan is working.

So here's what I've accomplished today

Posted by marythemom at 7:51 PM

I'm exhausted just reading all of that! I feel the need to go take a nap!

Tara took the words right out of my fingers! I just filled out and mailed two BASC forms to Alex's RTC. Oh, and sat and listened while they explained that we needed a new $6300 central air unit. Can you say window unit for the upstairs?

If you can find it, download a Flanders and Swan song called "The Gas Man Cometh". It fits your situation to a t.

#5 the dreaded BASC when I last filled out one (5days before last hospital stay) the person scoring/reading the results said I was overly negative while filling it out so my scores on it should be taken with that in mind! What the what? That was on a Monday the following Saturday it took 5 fireman to hold my son down so they could get him to the hospital. I do not feel like I answered it negative but honest. :(

jwg - lol! You're right. Here it is for anyone who wants to hear it. http://www.youtube.com/watch?v=zyeMFSzPgGc

MrsSanta - I hear that a lot when it comes to how I fill out the BASC compared to others (even my husband). No one else sees the child I see.

I also hate not knowing how to answer these stupid forms based on their mood swings, and the questions don't always work for attachement disordered kids. For example, one question was something like, does the child argue with parents and teachers... ummmm yes to the parents, no to the teachers (for Kitty anyway).

The form we have to fill out every 3 months for the MHMR asks where has your child spent the last 90 days:
___biological parents
___foster parents
___non-family home
___other family home
___psychiatric hospitalization
___juvie...

Adoptive parents are not a choice! So irritating. I'd understand for most agencies, but this one works with Medicaid kids almost exclusively and this is their own form, not a BASC or something.