Melting in the Texas heat 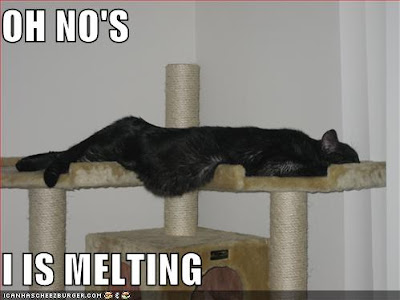 Yesterday Kitty had a big meltdown in which she was telling me the usual: I hate her, she hates this family, begging to go "home" (back to Nebraska to live with bio mom), threatening suicide ( - by clawing her nails into her neck?!)... the usual. I knew she wasn't going to kill herself so I was cleaning the kitchen and trying to keep her from escalating by my evil presence (ironically I couldn't win this because I was a horrible mom for "not caring" that she was going to kill herself). Frankly Bear had already told me what a horrible person I was all morning, and I was a little tired of hearing it.

So I decided to let her call her useless MHMR CaseManager who had decided on her own two months ago that Kitty didn't need an RTF so just stopped pursuing it. The CM listened to Kitty's side of the story ("Evil Mom wouldn't let her nap, even though she's exhausted because she's not sleeping well at night, and E.M. was telling her she needed to get up and do 20 minutes on the treadmill..." {previously arranged consequence for her defense mechanism of escaping by napping}). The CM tried to confirm Kitty's story, while Kitty was still wound up, which made it hard to concentrate, but I did confirm that Kitty claimed she hasn't been sleeping well, and that we were trying to get her a sleep study (at which point the CM told me that I had to go through Kitty's pediatrician to get this).

Today the MHMR Skills Trainer called to see how Kitty was doing... right in the middle of another melt down . When I called her back I was lectured on how I was supposed to be using the techniques she was teaching Kitty (a gentle exercise routine they "developed together" that Kitty will never actually do, but wouldn't hurt the woman's feelings by telling her that), and I'm supposed to be giving Kitty "more praise since she obviously didn't get a lot of that in her childhood." She also lectured me on how, "It's hard for parents of teens to know when to 'let their kids have more freedom.'" My daughter may be healing from her RAD, but she still has all her skills. She has this woman totally wrapped around her finger.

I'm still fuming, and Kitty flipped her swtich hours ago and is "fine" ...for now. She did let me know (at 5pm) that today's meltdown was because she'd forgotten to take her morning meds. *sigh* The CM called today and said she'd gotten hold of the pdoc and upped Kitty's sleep med (less than a week ago I was told I was letting her sleep too much *sigh*).

Did get an appointment with the pediatrician for Kitty today. Findings:

To make everyone's tempers sooooo much better, the repairs to my vehicle's air conditioning did not work. We're going to have to take it back in, and probably pay to have something else repaired. The "Service Engine Soon" light is on. *sigh*

On a positive note, I did get a recommendation for a potential job. The person who told me about it said there was only one area where she didn't know if I met the qualifications... I had to have a child with a serious emotional disturbance! Ummm...

Posted by marythemom at 9:39 PM

Good luck on the job!

Sounds like everything is "normal" for your house... just the same old chaos.

I'm hoping you do find an answer to Kitty's, um, intestinal woes. No better time to have to be GF, more products every week. My brother found out 2 weeks ago that he is celiac! And errant gluten particles can very much affect the brain / cause psychological symptoms (then why did my going GF not take away my mental problems? Sigh.) Be aware that the blood tests assume you've been eating gluten up to the time of the test ... but if she sees benefit from the diet, she is far more likely to stay on it ... like I said, two weeks may be all it takes for her to feel bad eating gluten again ... glad you are trying it.

This MHMR Skills trainer -- whose skills is she supposed to be training? (don't answer that.) I don't know, if she keeps hurting your feelings, maybe you shouldn't be so nice about not hurting hers.

Did you know Sprouts is having a 25% off GF products sale?

I did ask the doc about the fact that Kitty had been GF for almost a week, but she didn't think it would make a difference. Of course she also told me that Kitty was too old to have night terrors (that's ONLY in kids under 8 ... UNLESS IT'S AS A RESULT OF TRAUMA!!).