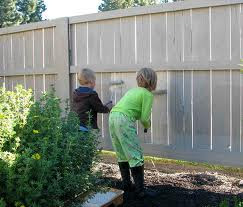 Probably need to change Ponito's online nickname to Tom Sawyer. This kid has gotten his friends to help him do his chores ALL Summer, and they thought they were getting away with something!

Summer rules were, "you can't play until ALL the chores are done." Ponito is apparently fun to play with, so his friends would help him do his chores so he'd be "done faster." Sometimes I would find the kids fooling around before chores were done (hence believing they were "getting away with something.")

This Summer I decided that ALL chores were worth the same amount of money, no matter how easy or hard. (You get a quarter for making sure the cat water bowl is full, mopping the kitchen floor or mowing the lawn!). Since ALL chores had to be done, even the tougher chores were completed. Some kids did a bunch of chores, some did none. Kids have personal chores that have to be done if they want to use electronics (like play on the computer). Surprised me but it worked. I'm sad about school starting tomorrow and we're going to have to go back to the old way.

Ponito is in the FAIR Club yet again.

· using a friend’s phone to get a Facebook account
· boldfaced lying with no remorse to both parents about it (even after seeing Mom pull up the account in question)
· smashing a fish tank repeatedly with a toy car while neighbor boy filmed it (even after told to stop)
· lighting trash on fire without adult knowledge or supervision during a severe drought
· saying rude things (like, adopted siblings are not really part of the family) and not apologizing, showing remorse or explaining what you meant {even though this may not have been how you meant it, you were told it could be taken that way and you still chose not to apologize}

Here's his writing assignment (it's tougher than usual since this wasn't his first offense and he committed another offense - and got caught with another - before I finished writing the assignment for the first!):

Extra Chore: Replant the grass in the front yard. Cut dead bush and trellis into lengths no more than 2 feet. You may include your friends, BUT you WILL tell a parent ANY time you do anything but the assigned chore (even chew gum). Make sure to clean up neatly and that all debris goes into the trash.

Writing Assignment: _ Read all of the sections of Trait#3 (in Becoming the Best You Can Be) and complete all of the activities and “Now You Try It” sections (make appropriate substitutions as needed – for example if it says younger siblings, substitute siblings instead), including playing the Integrity game with the family (add 5 cards of your own). Read Da Family Rules. Take the FAIR Club exam (because you got into trouble while already in the FAIR Club). Read “The Forever Child A Tale of Loss and Impossible Dreams” to help you understand how it feels to be adopted. Write apology letters (using the Rebuilding Trust page) to Bear and Kitty for rude comments about them not being “real” family. Write apology letter to Mom and Dad for lying and breaking their trust -include the definition of remorse. Complete the "What I Want" Page for Facebook and a cell phone.

The FAIR Club exam - is a consequence for getting in trouble when you're already in the FAIR Club. It's mostly fill-in-the-blank, True/False, Circle all the correct answers,... type stuff. On topics like Lying, Media, Stealing... etc.

One of Ponito's sections was Empathy. He had to watch the movie A Kid in King Arthur's Court (one we own that seemed applicable) and read a book about an adopted child (from the Forever Child series) and then write a short story about how it would feel to be a kid in King Arthur's Day who was thrust into our time. I wanted him to get some empathy for how it might feel to be Kitty and Bear and be told they're not part of our family because they're adopted.

Since school starts tomorrow I took pity on Ponito and let his friends come over and help him with this since it was the last thing he had to do. I decided to let him act out his story as Improv instead of having to write it down (although my original intention was to have him use this exercise to help him understand the assignment better, I decided to let it replace the writing assignment). Ponito is taking Theater this year and one of his friends who took it last year introduced him to Improv.

He and his friends had a blast during the first "show," but missed the point (how scary it would be for the time traveling kid) - their main character had a major teenage attitude. The second time I was the drama coach and set up the "scenes" with hints as to how to play it ("you've never been in a car before... you can't read... you're the foster brother and you're going to help him find his classes...").

If anyone is interested in what they came up with I'd be happy to detail it here. *Hint - in the first version they sent the boy to school and strapped him into a chair at a table with 2 other "special ed kids" who grunted like cave men and hit each other while they answered multiplication questions like 9x3=... It was hilarious but sad!*

**************************************8
Latest happening? I got the boys (Ponito and Bear) to rip out the carpeting in the front room (Bob is frantically trying to finish her Summer homework before school starts, and when Kitty's not a quivering bowl of melted jelly over the start of school, she's still allergic to the carpet, so she's excused). Guess Ponito gets the "Tom Sawyer" behavior from me.

They were excited about it and I didn't even have to pay them! Ponito tried to get his friends to come over and help, but I guess they'd already put too many hours in this morning with the Improv so they refused.

It's the only carpet left downstairs and for years every dog we've ever owned has decided it was the perfect potty spot. Our current dogs are generally outside dogs, so when they need to potty they don't have a "tell" (like scratching or whining at the door or barking) they just get up and wander into the other room. It's boiling hot outside so they're inside more often, and we recently had the front fence replaced so they had to stay inside day and night for 3 days. The 17 year old carpet was disgusting. We just couldn't get it clean.

Now it's bare concrete and I've got to figure out what to do with it. Will probably end up painting it for now until we can afford new carpeting or wood or something.

Posted by marythemom at 2:01 PM

Actually Ponito had a pretty fun Summer. Got to scuba dive and play racquetball with Daddy, and play with his friends (all 4-5 boys are the same age and live within just a few houses of each other).