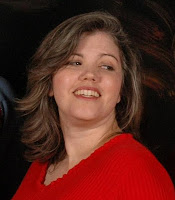 I've been told I look young, usually mid 20s. It's a major source of amusement to me to watch people's doubletakes when Bear calls me Mom. I always tell people my age, because I know I don't look it.

I'm 40 and don't have wrinkles yet. My mostly gray hair apparently looks like I have highlights to people who don't know I used to be a dark brunette. I keep my mostly gray chin hairs plucked and wear makeup to hide the zits on my chin (have I mentioned how much it stinks to have zits and chin hair at the same time?!) and to hide the dark circles under my eyes and the age spots. I dress nicely and hopefully in clothes that flatter my figure, whatever size it is (currently plump) - all those years of working in retail clothing stuck. I don't own any sweat pants.

Even in grad school, my appearance caused me problems. I had difficulty with my school sponsored internships and even lost one. I looked like I was 16 (I was in my 20s). In my stint as a professional seamstress I was often turned away by brides telling me they didn't need a salesgirl. I found brides watching my every move like a hawk because they couldn't believe I had the experience needed not to mess up their dress. I thought this was the end of the world, because how do you get experience if you can't get a job to give you experience?

When I went back to work after having kids, I sort of fell into childcare (because I could keep Ponito with me). It was a good job and I gained lots of skills (by the end I was supervising and training up to 60 employees), but it didn't pay well considering my education and experience, because it's a historically underpaid industry. Ponito got older and didn't need preschool care anymore, and I tried to leave the industry... and found I couldn't. One time, I went on a job interview with an insurance company, and was referred to as "that teacher chick" the whole time.

When we originally bought the company it was supposed to be Hubby's chance to get out of an industry he was bored with and get to use his MBA, but when the sale of the company finally came through I'd been home for 6 months (having quit my daycare job to deal with Bear constantly getting kicked out of school and Bob was having major heart problems) and it made more sense for me to take the job and Hubby to support the family while we got the company profitable. Hubby lasted one more month, then quit his job and joined me at the company.

So now, 3.5 years later, our company has gone under, Hubby has been back in his old line of work for over a year, and I'm... job hunting.

So I was on a networking call talking to a receptionist with a company where I was interested in working, and I mention I'm job hunting. She explains that her tiny company is mostly volunteers, but started commiserating on how hard it was for her to find a job when she was right out of school too.

Turns out this girl, obviously in her early twenties thought I sounded like I was younger than she was! OK, i'm used to looking younger, but now I sound younger?! Since I do a lot of networking on the phone I was freaked. (Yes, she was embarrassed when I casually mentioned I graduated with my Masters 20 years ago).

I talked to Grandma, and have to admit she was a little discouraging, but in talking it through I was reminded that I have a weird quirk - I mimic people's accents and way of speaking. When I was working in sales, I was always afraid someone would accuse me of mocking them like the Texans in the restaurant scene of The Master of Disguise, "Are ewe mawking my huusbaynd?".

So nervously I went to a meeting that night and met again with a potential employer - a bigwig in the field I want to get back into. We were talking about how I could help him achieve his goals and I casually mentioned again that I was job hunting. He told me about a job opening at another agency that he thought I'd be great for, because I had great presence and could bring a lot to the program. The next day he e-mailed me with the contact info for the head of the agency with a job opening.

I do that voice thing too. I used to have to make sales calls to different greenhouses all over the country. When I would get off the phone, the girl across the office could almost always tell where in the country I had just called.

Congrats on the job lead! I hope everything turns out for you!!

Congratulations! I hope all turns out well!