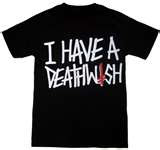 2. A suicidal urge thought to drive certain people to put themselves consistently into dangerous situations.

Bear is not what I consider to be suicidal. He definitely doesn't have a plan, and if you ask him, he won't even admit to suicidal impulses, but something that became painfully clear at therapy on Saturday when we were discussing how unsafe it was to go wandering alone, at night, in the rain, and worst of all GETTING IN A CAR WITH A TOTAL STRANGER, was that Bear not only thinks he's invulnerable, but he also doesn't care if anything happens to him. He frequently takes unnecessary risks, as though he has a "death wish" or is passive aggressively suicidal. In other words, I don't think he will attempt suicide, but he certainly puts himself in situations where death is possible. He won't deliberately step out into traffic, but he won't look both ways when crossing the street.

When Bear first moved in with us 4 years ago, he definitely had a strong death wish. We were convinced that he would be dead by 18, as that seemed to be his goal. He wanted to be front line Marines where the likelihood of death was huge, and he was OK with that. His other life goal was to be in a gang dealing drugs. He really didn't seem to care which. {OK, he did have one other life goal. He also wanted to be a professional football player, but he found out within a few months of arriving in our home, that he was done growing (at not quite 5'9" that pretty much negated a pro football career).}

After residential treatment, diagnoses and the right medication cocktail, we saw a lot of improvement, but as I look back I realize that Bear's ambivalence about dying, never really went away. His self-destructive behavior isn't as severe (no more cutting, yea!), but what I've been seeing as lack of impulse control and poor judgment, I'm now seeing as potentially being related to this. Some events can be explained by lack of coordination and difficulty understanding of the consequences of his behaviors, but his recently stated lack of caring if something bad happens to him really explains a lot.

In therapy while we were talking about risky behavior, Bear suddenly brought up a teenager who he claims drives like a maniac in our neighborhood and implied if Bear stepped in front of the car, it would be the teenager's fault and he "should know better than to drive like that." Bear clearly stated that he didn't care what happened to him, and was acting kind of macho about it. It was a little about the teenager learning a lesson and a lot about letting us know that he didn't care if he got hurt.

Now we're discussing consequences for that weekend's events and I don't know what to do. Some consequences were obvious.

Consequences at home is more difficult. Normally FAIR Club assignments are designed not to punish, but to help the child learn a lesson. Bear definitely needs to learn that there are consequences to his actions, but most importantly he needs to understand why what he did was wrong, and quite frankly, I can't think of how to teach that.

I did some online research, thinking maybe his assignment could be a research paper, but the statistics show that it's mostly women and young children being raped and murdered, which Bear would just see as proof that his behavior was fine for him (because he's not female or a child). The problem is that I can't show him that the 5% that happens to adult males, is 90% more likely to happen to him than to the average adult male because he is actively taking serious risks. And even if I could, that doesn't change the fact that he doesn't care.

I've contacted his case manager (who passes information on to his psychiatrist), and his next appointment is only 4 days away. Since he's not exactly suicidal I'm OK with this, but when the case manager asked me what I thought should be next steps, I didn't have an answer. If he were actively suicidal then our next steps would be obvious. If this were a recent or changed behavior then our next steps would be a little clearer. I know this behavior is a little worse (or maybe we're just noticing it more) because he's depressed. I'm sure the psychiatrist will be increasing his anti-depressant and/or mood stabilizer. But for something this pervasive and ongoing is this part of his identity or issues that can only be addressed with extensive therapy?

In the meantime, what do I do for a FAIR Club assignment? It doesn't have to be the perfect logical consequence that teaches the lesson in such a way that Bear gets it and changes forever (although if anyone has one that would be great!), but it does need to at least be related to what happened so he understands that his actions have consequences. It also needs to be concrete and immediate. Bear has absolutely no idea why this type of behavior would lead to us not wanting to put him behind the wheel of a car. He just doesn't seem to get the connection.

Posted by marythemom at 9:48 AM

Is it possible for Bear to articulate why YOU want him to be safe? Obviously he thinks that he's infallible. But could he write a paper about how you would feel if something bad happened to him? I'm sure it would have to be explained in such a way that everything is pure speculation. Because Bear doesn't want to admit that any of his behaviors are dangerous. But if he could just "pretend" something bad happened and have to think about how that would affect the family - it might help put a tiny crack in the wall of denial????

cGo back to the article on teen brains and you'll be "comforted" (terrified) to know that typical teens think they're immortal. (Oh goody, I get to go through this again with Ponito.) Boys especially just don't get it, and that part of the brain doesn't mature until about age 25 in men. That, combined with inexperience makes them awesome drivers, (sarcasm!)

When our kids were very young if they did something life-threatening we'd swat their bums (yes, we did) and it did exactly what you're trying to do - teach them that that behavior will cause severe pain. You can't spank a teen and you wouldn't want to.

My kids responded to restrictions, but Bear is already more restricted than any teenager I've ever known, so good luck. This is way out of my league.

Bear needs something that he cares deeply and passionately about. It seems he feels like a loser and he has no hope that his life will improve in the future.
You can impose curfews, put alarms on every door and window but if he's determined to leave the house and get into trouble he'll find a way to do it. He appears to view you and your husband as jailors and buzz kills who don't want him to have fun.
In the old days he could have joined a ship's crew or become a cowboy. I have no idea what to recommend for him if he has no particular strengths and nothing to aim for.
I'm sorry you're in this mess.

"You can impose curfews, put alarms on every door and window but if he's determined to leave the house and get into trouble he'll find a way to do it. He appears to view you and your husband as jailors and buzz kills who don't want him to have fun."

This is one way I know that Bear isn't a typical teen - he's not really determined to leave the house (nothing could stop him if he really wanted to). He doesn't appear to view Hubby and I as jailors who don't want him to have fun - he doesn't seem to think we're malicious or out to get him (most of the time). He thinks we're unnecessarily over protective, but weirdly enough he knows he NEEDS the structure, and it makes him feel safe and loved. He really is just a little boy inside, and this is the way we'd treat an 8 or 9 year old, and the way an 8 or 9 yr old would react (most of the time).

I think a lot of his behavior issues in the last few weeks were because he felt unsafe because he got away with it. He needs to know we're there to protect him, from himself if necessary.