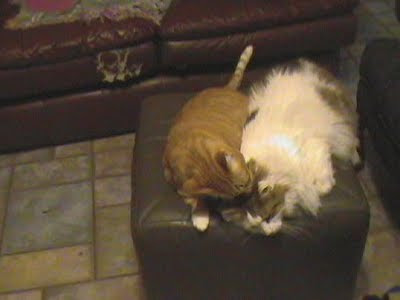 WARNING! WHINY POST! Please skip so you can maintain the positive image you have of me. I know others are having a much tougher time right now.

Waahh! My life sucks right now. Literally. I have a 160lb growth suctioned onto my hip that requires constant attention. She hasn’t made it through more than 1 ½ hours of school since she got home from the psych hospital (almost 3 weeks ago – seems like longer), and I’m spending most of that time sitting in the assistant principal’s office waiting for “the call” (“Moooommmyy, I don’t feel good…”) or talking to various administration trying to figure out if we have any alternatives (they’ve been great, but this is still killing me).

The rest of the time I’m driving her to doctor appointments, weekly pdoc appointments, 3x weekly therapy appointments… plus all the regular stuff that goes along with having 4 kids.

She belongs in a partial day hospitalization program, but the only one in town doesn’t take Medic*id, which is all she has (she and Bear are the only ones with any insurance at all). We’re finally getting the self-harming taken care of by getting her off the SSRIs she shouldn’t have been on in the first place, but now she’s vomiting and she told the school psychologist she still has suicidal impulses (to jump out her bedroom window – which wouldn’t kill her, but we’ve always allowed her to believe that, just in case). I don’t know when she’ll get stable. We try her on a new med (complete with scary addictive side effects) tomorrow.

Bear claims he hasn’t slept in a week, and of course believes that justifies his behavior (being an ***hole and picking on everyone – including Kitty, with the imagined results).

Bob is almost caught up after spending almost a week home from school with a major muscle strain from coughing (still hasn’t totally recovered, but has finally stopped laying around and moaning about it).

Ponito is in trouble for breaking a family rule, but other than that is just acting like a typical tween with all the accompanying hormonal induced behaviors.

Hubby still hates his job. He has been picking up odd jobs (teaching scuba, judging business plan competitions), so isn’t home much. Plus the bank has made a huge error that has put our house into foreclosure. Everytime they assure us they've gotten it fixed... they haven't. Also, he's worried about me, and frustrated with Odd's behavior - because he doesn't see her when she's feeling at her worst (she's like a pitiful puddle on the floor). He only sees her at the end of the day when she is more like herself (which is not exactly pleasant to be around, because she's whiny and defiant as she decompresses from the daily anxieties).

Bear is aggravating my PTSD; I’m not sleeping because of my bipolar, and I have NO down time or nap time because of my "leech" problem. I can't job hunt, and couldn't work right now even if I found one. I was expecting this to go much faster.

Hugs and thanks again for skipping this,

Mary
Posted by marythemom at 9:57 PM

Although I didn't read this, I am sending {{{Hugs}}} anyway.

If I had read this I would tell you that it WILL get better or just be different which can be better in itself. Problems won't go away but you work on getting yourself some rest and peace of mind and it will seem better. We're all still here!

I did read it-- because I am feeling very whiny myself this week and it is a relief to know I am not the only one who just can't stay positive all the time. *hugs*

Holy cow! I got freaked out just reading this post.
No health insurance for the rest of your family? Bank threatening foreclosure? A daughter who can't make it through a day at school? Bipolar illness?
Yikes.
Threats of foreclosure are not to be taken lightly. You've given the bank proof that you are not behind on the mortgage payments and they're still harassing you, right? A good "lawyer letter" (that's what we call them) might get them to back off. It's a simple matter, one that shouldn't cost much. That won't solve all your problems but it might buy you some much-needed peace of mind.

Thanks for the hugs guys! I really need them today!

The bank miscalculated our equity. Hubby doesn't bother to open the mail (don't get me started), he just pays what he knows he's supposed to pay. So for several months he paid what he was supposed to pay, but they thought he owed more. We got a foreclosure notice. Hubby called the bank and got it worked out, but apparently the bank just SAID they'd fixed it. Two months later, they returned the mortgage check and said the house was in foreclosure. Hubby called again and they SAID they'd fixed it. Lather, rinse, repeat. I'm sure it's on Hubby's "list" to talk to pre-paid legal.

Supposedly it's "fixed," but we are being inundated with letters from people wanting to buy our house because it's "in foreclosure." Ponito read one aloud to all the kids that had been taped to the front door before I could stop him.