Bob turns 13 next weekend. Bear turns 16 only 5 days later. Kitty is already 14. This means 10 year old Ponito is my only baby and the teenage hormones will be the majority. *sigh*

Anyone else's kids always "turds" around their birthday? Bob and Ponito both have ALways been horrid for one month before their birthdays. Kitty and Bear always have issues with holidays and special days in general. Bear ended up in residential treatment 3 days before his 1st birthday with us. Kitty had only come home from psychiatric hospitalization the day before her last birthday.


Of course last year we decided to finalize their adoptions right before their birthdays. No extra pressure there! *sarcastic drip* Kitty two weeks before her 14th birthday. Bear one day before his 15th birthday.

So this year we have to decide how to handle the birthday parties. We've already told them this is a "small" birthday party year. Maybe a friend or two over, and a birthday cake shared with the family. I usually make the cakes myself. We've had some doozies.

Last year for Bob I made a monkey cake, because she LOVES monkeys. It ws supposed to be a monkey eating bananas on a small island. 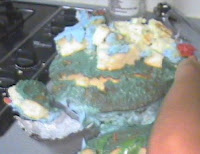 I ran out of icing so decided to use pudding dyed blue between the layers of the cake. Guess what? Pudding is slippery! The cake crumbled, parts of it slipped off, the island "refused" to float (unless you count "floating" right off the cake). *sigh* 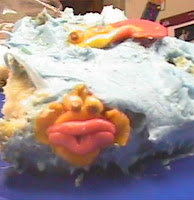 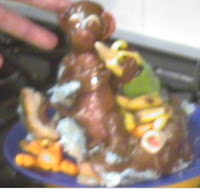 I had discovered that Tootsie Rolls could be molded like modeling clay. I spent days making an adorable (if I do say so myself) monkey holding a banana (wish I'd gotten some good pictures). There are different colors/flavors of Tootsie Rolls. So I made cute colorful fish, bananas, and even a coconut tree to put on the sand covered (graham cracker crumbs) island, made from Tootsie Pops! (the lollys were the coconuts). Then I discovered that while Tootsie rolls look like modeling clay, and if you put them in the refrigerator they would "harden," that when they warmed, they drooped. The adorable monkey and tree would not stand. Bob didn't care. They tasted delicious!


Have no memory of what Bear's cake looked like last year. This is what Bear looked like though. He outshone any cake possible!

We haven't taken pictures of every cake. I'm notorious for forgetting to bring the camera. Here's one from Ponito's 6th birthday. He wanted a dragon cake. This one was made with wings made from fruit roll ups on licorice frames. His scales made from gum drop slices. His gold was Nestle Treasures and jelly beans for gems. He was supposed to be one of those long snake-like dragons that curved in and out of the top of the cake (think Nessie the Loch Ness monster). Horrible picture - sorry.

This lizard for my nephew turned out cuter. It had chocolate chip spots that spelled out his name and the message. We call this picture the "two headed boy." 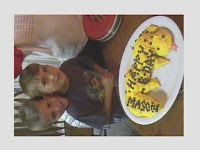 This was one of the best years for cakes. Bob had wanted a princess theme. One cake was Cinderella. The other cake was Little Mermaid. The Little Mermaid "cake" was actually made from Rice Krispies made with colored marshmallows divided into different colors. This cake ended up feeding almost 200! We took it to Bob's daycare since it hadn't been as popular as the chocolate cake at her party. The entire school had it for snack and then there was tons left over that the teachers took home. I think the whole school ate it two days in a row.! 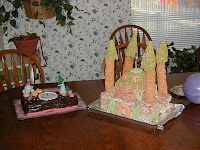 So have to decide what we'll do this year. Bear will probably want a carrot cake. It's his favorite.
Saw some lovely pictures of cakes on Cake Wrecks (an absolutely hilarious blog about cakes gone wrong). Think these will make good choices? 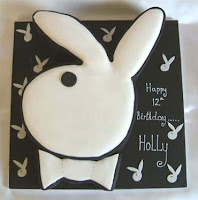 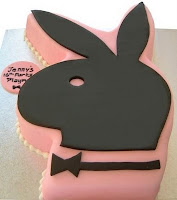 Can you believe someone actually had this made for their daughter's 12th birthday?! Poor Holly.
Posted by marythemom at 9:11 PM