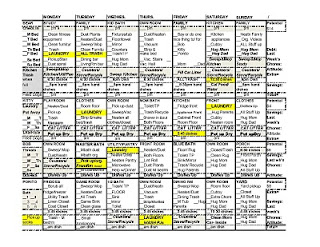 I think I've mentioned that our kids have pretty extensive chore charts. They look even more elaborate than they are because we've broken down all the tasks into smaller tasks. Some days kids have therapy or have requested almost no chores on the weekend. I try to avoid blank spots (so others don't complain that someone has fewer chores than they do) and if you notice they're lots of "Hug parents" as fillers.

Bear (17) still owes about $100 for property damage and theft so he is on "double chores." Which means he can earn up to $2/day with a possible extra dollar for attitude. (We realized since he only did about half his chores, at the rate he was going he'd still owe us money when he was 50 so we doubled it. Now he still does half his chores, but that's twice as much!).

Ponito (12) has full chores, which means he can earn $1/day (with the extra $1 for attitude). Lately he's been lying about completing his chores (rerunning the dishwasher with the same dishes, claiming he cleaned something when he didn't actually do anything...).

Kitty (16) is on 1/2 chores, because that's all she can handle. Chores are a major trauma trigger for her.

Hubby has been checking the chores for the last few weeks because it had become a MAJOR issue for me (Ponito's lying, Kitty's meltdowns, Bear and Bob's defiance, everybody's general laziness as to what constitutes "complete" chores... trigger my own issues. The kids are not allowed to watch TV or play with anything electronic (computer, Gameboy, Playstation...) until all chores are done and checked. Now that I no longer check chores, this means they have to wait till Hubby gets home at 6:30pm. This has been tough on them, but no one has suggested I take back over! *grin*

Hubby had threatened that they would have to do extra chores over Spring Break, but told them yesterday that they were off the hook. No extra chores. Just their regular chores... done to MOM's standards. They all thought this would be easy, but it's almost 3pm and they're still cleaning.

Actually most of the kids had finished their chores. All but Kitty. Her chore was the playroom. Which is rarely used, but Kitty has been giving it less than a lick and a promise for months and months and it had become a HUGE undertaking, even though I've enforced a cleaning/ decluttering about every 6 months.

Here's some of the things they've removed:

I'm not a perfectionist, but I think you all would agree that their definition of clean is not the norm. Normally I'd insert a picture here, but my network is down and I can't access one. *pout*

Please just use your imagination. Or maybe you shouldn't. If I go missing, please interrogate my kids.

I seriously need to get my World's Meanest Mom badge made. 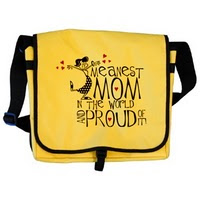 Email ThisBlogThis!Share to TwitterShare to FacebookShare to Pinterest
Labels: chores

I love the chores list. I may just have to enact that exact same type thing in my house. :)

Let me know if you want me to e-mail you my Excel spread sheet as a template! *grin*

The fish tank full of dismembered Bratz dolls sounds like an artistic masterpiece to me. Give it an impressive title like "Approach the Distance Within" and find a gallery that will show it. There are big bucks to be made.

Hilarious! You're so much more organized than I am! At our house, T makes US do chores, because he has a compulsive cleanliness issue. Believe me, that's a mixed blessing. Good luck with your spring cleaning!

I would love the template for this Chores list!
You did a great job organizing everything!!

Autumn - if you comment again with your e-mail addy, I won't publish it - and I'll send you the template.