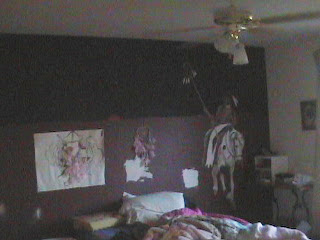 Stripping out Bear's room. I don't have to tell you how it's going... I'm sure you could hear my EEEWWWWWSSS! And if you missed mine, then I"m sure you heard my daughter's when she realized she'd just picked up a used condom with her bare hands. Poor Bob!

Got most of the stuff sorted - one rubbermaid box of stuff he might want to keep. 8 kitchen garbage bags, 20 loads of laundry, only one garbage bag of dishes!, relatively small pile of stuff that's not his (it hasn't been that long since I searched last)... he's definitely got some hoarding issues.

Now to sand down the walls (he spits EVERYwhere), rip out the carpet (same reason), get rid of the fish tank and most of the broken and permanently stained furniture, mend the holes in the wall... then all I have to do is wash all the laundry and figure out what to do with it, repaint the walls, replace the ceiling fan, lay the new floor squares... and figure out what to do with the space. I guess convert it into a guest room when the smell is gone.

Oh and try to reclaim the kid bath that no one else would share with him, but I think for a lot of that we're going to have to hire a professional.

The doors for the playroom came today and Poppy is installing them. Hubby is helping a little, but is mostly frustrated with the way Poppy has decided to do it, but since Poppy paid for the doors he doesn't feel comfortable complaining.
Posted by marythemom at 2:41 PM