Bear on the bus 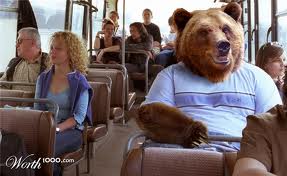 Bear turned 19 a few days ago (which signifies the end of our adoption subsidy with the state we adopted him from).  I was looking forward to "proving" to him that we will still love and care for him even though we're not getting "paid" for it anymore.  He gave us that chance at midnight last night.

He's been living with his biograndfather for the last 6 weeks since graduating from high school a couple of months ago.  He'd moved out of our home back in January (evil parents that we are, we'd insisted that he do a couple of household chores or lose his iPod -so he moved out).  6 weeks is the longest he's ever managed to live with someone (besides us), so we were half way expecting him to be moving on soon.

At midnight he calls and says biomom backed out of paying for his bus ticket to go live with biograndparents in Nebraska, and the biograndpa he's been living with had dropped him off at the bus station in the city where Biomom lived and then had driven home (2 hours).  I knew biomom had moved to Nebraska a month ago so he must be lying about something (well, probably everything).  {Sorry Biomom if you didn't want him to know you'd moved.  We didn't know that he didn't know.}

Hubby was exhausted from teaching scuba all day, and had to get up at 5am the next morning and is a softer touch than I am, so while he did use this to force Bear to talk about some details of Bear's current life, Hubby went ahead and bought him a ticket.  Bear even said thank you, although he didn't apologize for yelling at Hubby, even after Hubby reminded him that it wasn't smart to yell at someone over a problem they didn't make, and when you want them to do you a huge favor!

Some of the info we got from Bear (very little of which I believe).


His stories conflicted, weren't rational and were pretty much unbelievable.  In short, nothing's really changed. *sigh*

I had Hubby let him know that the benefits coordinator we had working on his SSI (who was supposed to send it in at the beginning of June, but apparently didn't!), now had some questions for him that I couldn't answer (his daily schedule for example).  He said he'd call her.  When his disabilities do qualify him for SSI, it will be interesting to see if the military catches on any time soon - assuming he really has applied to the military and they believe the lies he'd have to tell to be accepted.

Posted by marythemom at 1:14 PM

Hi, I've been following your blog for a while because I'm a social worker and I love hearing foster/adoptive parents stories. You are incredibly patient and I have no idea how you do what you do!!

Have you thought about linking him to transitional living/independent living services? I don't know what's available in your area, or the area where Bear is living now, but it might be helpful to have some extra support. I would be going crazy if I were you right now. Maybe something like this could help http://www.youthvillages.org/what-we-do/transitional-living.aspx

j and s - Thanks for the suggestion. I had Bear hooked up with several different programs locally, but he refused to work with them, and since he was 18 and not labeled as "disabled" he HAD to cooperate to get them. He cut ties with us months ago so we weren't able to help him with transition stuff as he graduated, and the school had him convinced he was "normal" and didn't really need them anyway.

He doesn't make the connection between the fact that he can't hold a job for more than 6 weeks and his disabilities. He blames it on others. The problem is that NO ONE really makes the connection. He slips under the radar because he can get a job.

I really feel bad that you feel the need to "prove" once again that you are there for Bear in spite of not receiving the monthly subsidy check. I don't know how it's gotten to this point with some of our kids, but when in the world was it any of our business how much money our parents made or what kind of benefits they received from work (insurance, 401K, whatever)? I feel like the normal, healthy boundaries between parents and children have just been pushed too far for too long and now we "owe" them proof of something. What? You have proven yourself every single day Bear lived under your roof. HE made the decision to leave - that's not something you could have changed. It truthfully doesn't matter whether he wanted to reject you before you rejected him when the subsidy ran out - that was nonsense thinking to begin with.

Be careful how you "help" him from this point forward. Helping him/proving something to him can be manipulated into enabling him. The fact that he was lying to hubby the whole time does not bode well.

I feel for you - I have been there recently. The fact is, the first few times you say no are the hardest. It most definitely gets easier the more opportunities he gives you to practice it. He is an adult. He is making his decisions with no input from you whatsoever (per his choice). Now is the time for him to figure out "HOW" he is going to make things happen in the big 'ol world out there. You have to remember that he seems to be content living with alot less than you wanted for him and much less than what you provided for him when he lived at home. Don't make this about what you want for him instead of what he's willing to work for on his own.

Thank you Lisa. I needed to hear this. I do have to say it was Hubby who gave him the money. I seem to have a much easier time saying no to him! (Which of course is why he called Hubby instead of me.)