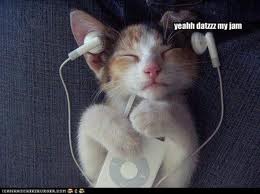 Hubby got a new phone, so he gave his old one to Ponito.  Which meant Ponito no longer needed his iPod which has internet access and can be used for texting.  After MUCH discussion, we decided to give it to Kitty.  She's been fairly stable this Summer, and while I expect that to change when school starts, I am hoping she will be a little bored of the whole thing by then.

In the meantime she's obsessed.

I need to establish and maintain some ground rules though, because she's done NOTHING without the stupid thing in her hand.  She's only had it two days and has spent most of that time isolated in her room.  Even when she had a friend over, they literally sat and played on her iPod for 5 hours!  The friend was a boy so they had to stay in sight, but we have a lot of options besides sitting staring at a little screen.  *sigh*


When all of her friends were busy today, she called her biograndmother (ex-wife of the biograndfather Bear is currently living with) and read her the jokes from an app.for over an hour!

Bear was supposed to be coming home from Oklahoma yesterday - just to pick up some stuff.  He said he'd be here this morning, but no Bear, and no phone call.  He's gone through yet another phone, so I don't have a phone number for him.  Hubby does though and tried to text him around 3pm, but no reply.

I'm guessing he also was hoping Hubby would give him all his scuba equipment, but the more expensive stuff like the BCD actually belong to a cousin who didn't mind if Bear used it.  When Hubby reminded Bear of that, Bear may have decided it wasn't worth coming by or maybe didn't even come to town.  Don't know.

Bear's 19th birthday is this month, and I think he's hoping Hubby will spring for some of the scuba equipment.  Bear claims he's working at a marina in Oklahoma and could use it.  Money is tight though, especially now that we no longer have Bear's adoption subsidy to help.  I may have to go back to work, whether Kitty can handle it or not.

Kitty is stressing about Bear's visit.  Especially because he said "WE" are coming by.  She's worried the other person will be their biograndfather (who Kitty hates because she thinks he's mean).  I think that it's extremely unlikely to be the Grandpa and told her so.  More likely it's the girlfriend Bear left behind here in Texas, but it could just be a random friend.

Kitty is also not happy that I told her she has to be here while Bear visits. She's finally fairly stable though, so I think it's a good idea.  Not that they'll mend their relationship any time soon (if ever), but it's good for her to have some continued contact, and better now than when school is going.

Bear has been talking about joining the Navy (the date he's applying keeps moving back).  Will be interesting to see if he can get in.  Of course he'll have to lie a lot about his mental health, plus if they give him any psych tests, it's extremely unlikely he'll pass.  Supposedly the military doesn't mess with dishonorable discharges for this anymore (they just discharge you), but it's something to worry about.

It's really too bad.  Bear probably would do well in the military (assuming he were taking his meds regularly).  He really benefits from the structure.

A little after 4pm we finally heard back from Bear.  He had some things "come up" so he's not coming this weekend after all.  Would have been nice to know.  He texted Hubby he would come next weekend, but Hubby let him know that wasn't convenient for us (Hubby will be taking Ponito to soccer camp on Saturday).  Bob's bday is in less than 2 weeks and we still need to decide which weekend she wants to celebrate.  She wants to have a slumber party so no date night for Hubby and I.  *pout*  Oh well, we're so blessed that we get these on a regular basis.
Posted by marythemom at 4:11 PM