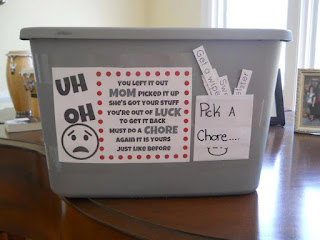 Saw this idea on Facebook and loved it.  We've already implemented it.

Kids have been busy, and I've been tired so I was late getting the Summer Chore chart going, but this great idea, and a friend coming to the house to visit for the first time, were the kick in the pants I needed.

Kitty and Ponito have already had one round with the Uh Oh bucket.  They both "chored out" at least one pair of shoes (yes, I made them do a chore for EACH shoe).  The rest of the stuff was mostly deemed unworthy of a chore, so will be heading to Goodwill.  Means I'm doing a little more picking up for now, but is definitely helping clean out the accumulated junk they don't need or want.
Update: For future reference this doesn't work with Bear and Kitty - for them it's out of sight out of mind and they don't have the ability to choose to do a chore, especially not well - it's too overwhelming for them). It's also a strong defense mechanism not to attach to things. They've lost a lot in their lifetime and it's easier/ safer to stay detached.

Last Summer's chore chart worked really well, but I don't have as many kids this Summer, and one of them is Kitty, so I have a feeling the house isn't going to look very good!

Last Summer I listed all the daily chores on one big list and the kids put their initials by them as they were completed.  It paid only a quarter a chore, but you could do as many or as few as you wanted (actually I think there was a minimum of 2) so if you did most of them you could make about $20/week.  The only other motivator was that no one could go anywhere or do much of anything (especially play with anything electronic) until the day's chores were done.

Not sure how to handle that this Summer.  I did decide that Kitty's chores will not change.  She can do chores from the main list if she wants to, but mostly she has regular chores that are hers alone (feeding the dogs in the morning, putting up the dry dishes, wiping the kitchen counters, emptying the kitty litter...). She does better with the consistent structure of these.

This of course leaves the burden of the chores on Ponito and I.  Not sure how I'm going to handle that yet.

Ponito has had a REALLY laid-back Summer.  Mostly hanging out watching movies with his girlfriend (under my supervision of course).  He's going to be miserable at Soccer Camp next week.  I've seen the schedule and they're going to be running his buttocks off from 7am to 9:30pm... and he has no buttocks to spare!  He was in fantastic shape at the end of the school year, but he's been lazing around ever since.  Oh well, he'll figure it out!

Posted by marythemom at 4:47 PM