Comments on Kitty and Chores 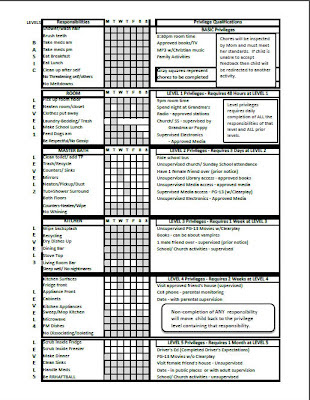 I've been having an interesting conversation on an older post about the level system I created for Kitty last year. I wanted to share it here.


Adrian said...
I'm pretty sure I couldn't handle that when I was 16. If the end goal is teenage privilege doesn't it go with the idea that its being used on teenagers? Who will scoff at being monitored in terms of hygiene, much less having only same sex friends over or having a bedtime?
If they can't regulate themselves well enough to actually need an enforced bedtime, then they aren't 16.  I'm sorry to dismiss your idea, but you're inappropriately restrictive to such a degree I had to say something.

marythemom said...
Adrian, that's pretty much my point. She's NOT a typical 16 year old. A 16 year old SHOULDN'T need to be monitored in terms of hygiene, and SHOULD be able to have friends of either sex over and watch PG-13 movies without becoming totally dysregulated. Bob (now 16) can handle all of this stuff without needing any of this regulation (Ponito at 13 mostly can too). Kitty (chronologically 17, but emotionally and socially only 6yrs) can NOT handle this.

This level system was created for lots of reasons, but mostly to show others that we've tried to treat Kitty like she is her chronological age, and she is unable to get past level 2 and really is often stuck at Basic. Once we established this over a period of a couple of months, we felt we had enough evidence that Kitty needs a much more structured and supported life, and we dropped this level system. Kitty now gets the "age-appropriate" privileges and responsibilities that she can really handle without having these unattainable privileges dangled over head.

Adrian said...
Thanks for the explanation. You must care a lot or at least have pretty tough skin to get a 16 year old (Bob) to do chores regularly.
I don't doubt that Kitty can't handle it because of immaturity, and works better on lower age restrictions. I was just wondering how a regular teen could possibly listen to parents enough to get far on the system (which seemed to defeat some of the purpose). I didn't ever seem all that defiant growing up but I'd still do chores pretty rarely, and virtually never at anyone's request (2 people, 1 house, really not many chores period, did them when I was the one who needed dishes or some such). And I grew up with a mood disorder so I couldn't do much like that on demand just from depression.
I've read your blog for awhile and can't help but gawp a bit on how many restrictions you have on your kids, even though it makes some sense and it's your situation and works for you. Even if I disagree a fair bit, you have some good ideas, you really care, and I can't help but feel for your kids.
I wish you'd mention more about what it is Kitty does well, skills, hobbies. In the chaos for her several diagnosis she must have some small talent? :)

Adrian - I'm enjoying your comments.  One reason I blog is to explore some different perspectives and sometimes help me see the forest for the trees.  I did post more about chores a few days ago, but I didn't happen to address some of the things you brought up here.

One big point is that Bob is NOT doing chores regularly (of course she's living at Grandma's right now, but even when she is home...).  This chart was designed to put concrete tasks, and a few abstract ones, associated with developmental stages into a level system so that mastery of each level represents readiness for the accompanying privileges.  I needed to show that Kitty was NOT ready to be a teenager.  Bob on the other hand has DONE these stages and has already proved to me that she's ready for these privileges.  Kind of like once a child has mastered learning to read, you don't make them keep doing letter recognition exercises.

This is a large house full of a lot of people with some pretty major needs.  I used to be a laid-back, go with the flow kind of person who hated confrontation.  Plus, I too dealt with depression as a youth and learned to work in spurts between bouts of depression.  Unfortunately, that just flat out doesn't work in this house!  I've had to become a structured, micro manager, and I really hate it!

I'm also an "over protective mom."  I grew up in this urban area and I think one reason I came out as unscathed as I did was because my mom was strict.  Yes, I rebelled, but compared to what my friends with parents who didn't give a crap were getting in to?  I was a "goody two shoes."  My friends were raped, became addicted to drugs and alcohol, got in serious car accidents, and even went to jail for killing someone.  I survived it, but sometimes that was only because I was lucky.

Hubby grew up totally differently from me, and sometimes we disagree, but he does provide some balance to my decisions I hope!  There are some things my biokids struggle with and areas where I feel sorry for them too.  Living the life we do is hard.

You asked why I don't talk about what Kitty does well.  Some of that is because that's not the focus of this blog, but a lot of it is because there's not much to say.  Kitty has a severe personality disorder and is mentally ill.  She doesn't have a lot of interests (unless you count iFunnies).  We've talked about her needing hobbies, but she doesn't want any.   She likes working with little kids and has fun playing with them, but she's not actually good at taking care of kids and requires a lot of supervision.

Frankly, she doesn't have a lot of things she's good at - she struggles socially, academically, emotionally and physically.  Most of all, she's not fun to be around.  She's unmotivated, self-centered, and prickly, with little empathy and understanding.  Her self-image is that she's unworthy and unlovable and she tries to prove it.  She fluctuates between being depressed and miserable, anxious and angry (particularly at me), and hypo-manic (demanding constant entertainment and babbling incessantly about stuff that only she cares about).

Quite frankly she's a hard little girl to love, and even harder to praise.  I work hard to keep her busy and trying to instill in her pride in what she does.  It's also hard to keep her from comparing herself to Bob who is by no means perfect, but doesn't have anywhere near the challenges Kitty has to navigate daily.

Hey. Haven't looked over the newer posts yet, but wanted to post something before life got in the way again ^^'
Its a good detail that Kitty doesn't have the skill to do those things even if it isn't ordered of her. I hadn't realized how severe it was in that sense.
You must at least get a somewhat clean house out of the deal right?
Like. Ouch. I always figured people from the most restrictive homes rebelled the most, not the least. But I never had much in the way of rules growing up, and never really needed any so I couldn't judge. No bedtime past 12, chores were dishes or laundry and they got done by someone. Curfew was a word I learned on a school vocab list. I was and still am a goody goody.
I remember the 'you need hobbies' talk when I was a kid. I figured it was more a matter of absorbing things to do from friends or forums and running with it, but I guess she doesn't have friends to get ideas from so much.
It sounds desperately hard for all of you and best of luck in the coming year to have things turn out better than Bear.