Kitty likes children and had decided she wants to be a preschool teacher (this has been her plan ever since I had to tell her she couldn't become a surgeon).  Since she's graduating high school in less than 2 years and would most likely not do well in college, I decided to let her do a free internship with a friend of mine who runs a home daycare.  Kitty loved it, but it did stress her out when the toddlers didn't listen, she needed to multi-task (like break up an argument while watching babies - she left the babies on the couch and the toddler pushed the infant off), or dealing with the older children (6-10yrs) who were teasing the younger kids (she'd come home and tell me how she wanted to punch them in the face because they "knew better").

Despite me repeatedly relaying my concerns to my friend, my friend kept leaving Kitty alone with the kids while she talked on the phone, changed a diaper, went to the restroom... While I do think she was listening to me, I don't think she really believed me because Kitty is ssooo conscientious and helpful.  She LOVED having Kitty there, and the kids loved Kitty too.  It went from being a few hours twice a week, to every afternoon.  Kitty loved it so much, although she did find it very draining.

Kitty would never deliberately hurt a small child, but she has very little empathy, can't multi-task or prioritize, and can't make quick decisions when things go wrong.  So why did I let her work in a daycare?  Because we have no proof until we let them attempt it, right?   I'm constantly getting pressure to allow her to get job-related skills, especially in areas she's motivated in, like preschool teaching.  Plus, I thought this would be a controlled enough environment and a good assessment of whether or not we should try to find another direction for Kitty while we still have a little time.

The other day another Trauma Mama invited Kitty, Ponito and I over for a play date with her two kids of trauma (girl age 8 and boy age 12) and her 3yo bio triplets.  The mom mentioned that she wished she knew Kitty was interested in childcare, because she would have hired her as a Mother's Helper this Summer. While the mom and I tried to chat, Ponito played with the boy and Kitty was left to play with the remaining kids.  Usually at least 1 of the triplets was hanging on mom while another vied for our attention, but they alternated hanging all over Kitty.  Between them and the 6yo, Kitty was complaining of a headache and begging to go home within an hour.

I don't know what to think of the results.of this Summer's experiments.

The mothers of the daycare and my friend gave Kitty gifts on her last day (one of the joys of working in daycare!).  Kitty got $50 in cash from my friend, $10 gift cards to Bath and Bodyworks and a place that sells games, candles, lotions, even a pair of pajama bottoms.  She loved all the loot.

Have to laugh at Kitty with money in her pocket.  To say it burns a hole is a uber-understatement!  She's been trying to spend it on something, anything, since the day she got it.  "Mom, can I have my money so I can buy lunch at school?"  "I'm dying of thirst.  Let's get smoothies/ ice cream/ Sonic... I'll spend my money." Kitty:  "I want to go to {Barbecue place}"
Me:  "We don't have the money for that right now.  Plus, many people in the family don't like barbecue.  Maybe we can go this weekend."
Kitty:  "*whine*  *beg*  I'll pay for it with my own money! *whine* *beg*"
Me:  "You mean you're going to pay for the whole family to eat barbecue with your money?"
Kitty:  "NOOOO!  I'm just gonna pay for me!"
Me:  "Well then I don't think we'll be eating out tonight."
Kitty:  "*whine*  *whine* *beg*  *whine*"

Memorial Day weekend I needed to go to the fabric store during the sales to pick up some supplies for my first bridal customer in years.  Bob needed new (appropriate) shorts, and a friend had told her to go to a particular store in the mall.  Normally we never go to the mall because I can't stand paying retail after years of resale/thrift store shopping!  Plus, Kitty gets the gimmies.  This time though I figured she needed to use her gift card and hopefully there would be big sales.

So off we went.  Kitty was over the moon!  After hitting the fabric store we went to the store in the mall that had shorts.  Kitty, appropriately, asked if she could also look for shorts.  I said yes to both girls, but warned them the shorts had to be on clearance.  Kitty found 2 pair with enough bling to satisfy her, and Bob found 3 pair that were long enough for school (shorts that are fine on other kids, look like Daisy Duke's on Bob's loooong legs - she's 6ft tall now).

Then it was time to actually brave the main mall.  We went to Bath and Body works first.  I mostly waited outside because smelly stuff makes my eyes water and my head ache.  Finally went in because Kitty couldn't make up her mind.  She managed to find $11.50 worth of stuff and used her debit card to pay the $1.50.

Then I decided it was Kitty's money and if she wanted to blow it at Hot Topic (which she considers the ULTIMATE store, and I never let her shop at), then that was her choice.  Whew!  She handled it OK, despite there being so many choices... until it came time to figure out how much she could spend.

The t-shirts were buy one get one 1/2 off.  Kitty couldn't do the math.  I walked her through dividing the cost of the less expensive t-shirt in half and then adding the amount to the cost of the other t-shirt.  Then subtracting that amount from the $50, minus the $1.50 she'd spent at the other store.  Mostly I tried to stand back and let her choose (I nixed an item or two) and pay for the items.  She got to the front of the line, handed the guy her debit card... and found out she needed photo ID.  *sigh*  She hadn't wanted to bring in her wallet so she only had the gift card and the debit card.  Plus she'd lost her student ID card.  I ended up paying for it.

Kitty was a happy little camper for a whole 20 minutes! 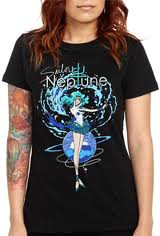 NOT Kitty!
Posted by marythemom at 1:59 AM