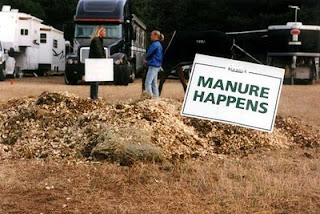 Forgot to note that the evening of my The Poop Hits the Fan post we got to do our first volunteer work at the Hippotherapy (hippo means horses!)/therapeutic riding place. Kitty and Bear were sidewalkers, which means they walk alongside the horse holding the saddle and usually bracing the child (usually a child) in place so they don't fall off. We were there two hours and I got to watch a little of the second hour. Bear was walking with a little girl, and when I noticed her tiny hand rested trustingly on the back of his big man hand, I thought my heart would melt.
Bob isn't old enough (she's counting down the days though - 4 weeks and 2 days) to work with the horses and neither of course is Ponito. You have to be 14. Until then you have to be supervised at all times by a parent which means I can't work with the horses either. Bob was planning on working in the office (in spite of getting Grandma to buy her new $120 men's boots!), but they were closed. Instead we mucked stalls.
Bob whined. A lot. The lady showing us what to do, finally made a deal with Bob - 3 stalls and then you're done. She let Bob help her lead out horses, and at one point Bob followed the working horses and picked up things (they were using toy food for something). Ponito and I mucked stalls steadily for over 2 hours (yea Caerobics, I wasn't even sore the next day!).
Ponito was fascinated by the mice, maggots, raking the refuse away from the wheelbarrow dumping area to make room for more, filling and dumping wheelbarrows (full of hay, uneaten alfalfa and of course manure and stuff), and finding and mucking hidden pee - in that order! He is such a little boy! I'll admit that cleaning the kitty litter box, while taking less time smells more and is a yuckier chore. This place is clean and fresh"ish." These very special horses live like royalty! Most of them are in their late 20s and 30s!
We're going back on Saturday. They really want me to help, but I don't have a lot of options of things to do with Ponito, and he's too young to be unsupervised (they asked if I could let Kitty and Bob supervise him - even though technically Bob is supposed to be supervised too, but I don't let any of the kids supervise each other - too much of a chance that someone will take advantage of the situation). They'll make due with Kitty or maybe my sister will take Ponito (she's finishing moving out of her old house this weekend - they leased it - so she'll probably not want him. We'll see).
Posted by marythemom at 11:11 AM

Sounds like a great family activity. GB did 8 months of Hippotheray and loved it :)

sounds like a good thing, hope Bob can be patient till she is old enough.