Who let the dogs out?! 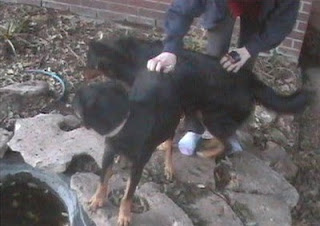 Wednesday morning the stupid dogs got out. Ponito and Hubby caught our old husky, Scarlet, who never left the front yard, but the younger two were long gone. Did I mention it was raining? So I threw a long t-shirt over my leotard and biker short outfit (I'll spare your eyes from any pictures), and Ponito and I went looking. Couldn't find them, so everyone but Bob (who as usual wasn't dressed and ready to go - she hates mornings), hopped in the van and we drove around a little. Still couldn't find them. Minutes after we got home the Animal Control people called. They'd found the dogs and would bring them to us (yea!). The bad news was they'd found them in the creek area so they were covered in mud and burrs (yikes!). This is when I found out that Princess' collar didn't have any tags on it ("Mom, we told you that a year ago!" *sigh*).

I decided the dogs needed a major bath and brushing to see if we can get the burrs out (Prince is a long hair dog and he had burrs EVERYwhere). Of course if we're bathing them we might as well wash them with flea shampoo, and if we're washing the two dogs we might as well wash all 3... and that's how it started.
At first I tried to stay clean. I bent over at the waist, then I crouched, then I kneeled (ouch! bare knees on the concrete driveway), and finally I gave up and sat directly on the wet concrete. Getting all the burrs off Prince took at least 20 minutes of scrubbing, cutting and brushing. Shampooing him and getting him rinsed was difficult. He has really bad hip dysplasia so he leaned his 75lb body against me most of the time. The kids washed Princess (a Rottweiler spaniel mix only 45lbs) and took her inside. For a long time I tried to keep at least one kid outside with me. The weather was perfect for this. Here in TX I usually can't spend 4 hours in direct sunlight, washing and trimming dogs. 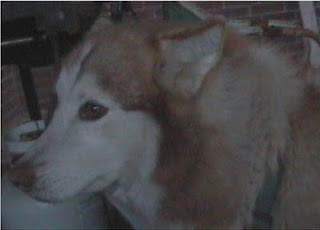 Poor Scarlet, our Husky. the kids tried to wash her, but the water and shampoo didn't penetrate even the top layer of her coat. Huskys have a different kind of coat than most dogs. They have guard hairs which are like most dogs regular coat, and then they have an undercoat which is a dense, felted mat of fur. Kind of like a bed of nails (guard hairs) with 2o layers of dense down blankets (undercoat) embedded into it. 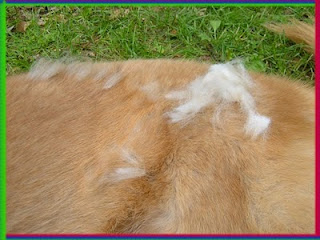 Two or three times a year they "blow out" this undercoat, meaning the undercoat detaches from the skin, but the guard hairs don't. The undercoat once removed looks like you could make a whole new dog with it! 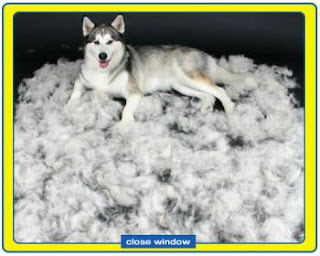 There's tons of the stuff, but the undercoat is hard to get out because the guard hairs hold it. You can rake it out with a funky brush (we use a slicker which looks like a regular brush but the bristles are bent like talons), you can pull it out by hand (takes forever), or you can shave it all off (shortening the guard hairs and then raking out what's left - a little easier). Every book you read though says you should NEVER cut the dogs' guard hairs because they need it to help them regulate their temperature and protect them from the sun, but this is TX. Poor Scarlet is prone to yeast infections and is chronically miserable from the heat. So we trim her.

One time we took her to a pet store to get her undercoat professionally blown out and they charged us almost $150! It's not usually that much for a husky, but she's double the weight and her fur is twice the length (about 6 inches) of a regular long-haired husky. Lucky us.

We've tried to shave her, but her coat is so dense it burns out any razor pretty much immediately. So we have to use scissors. Which takes hours and hours. You can't get it more than an inch deep cause the scissors just won't go any deeper without getting stuck. When you finally get close to her skin you have to be so careful cause her skin is the same color as the undercoat. I can't tell you how many times I've nicked and scalped the poor thing.
Needless to say that she hates the whole process. She doesn't understand that it will make her feel better when it's gone. She remembers the pain of the nicks and scalpings. She has to stay still for hours. She usually will try to escape and has to be tied up. It take hours and hours and every time I think I'm almost done I realize I haven't gone short enough (or of course I've gone too far and she's bleeding). When she's done she usually looks awful (being cut with scissors makes her look chopped up, not sleek), and she's still pretty heated because even a half inch of that dense mat is like wearing a down coat - not fun here in TX.

ANALOGY TIME!
This feels like the lack of progress we're making with Bear.

Anway, I'm now incredibly aware that I'm not young anymore. 4 hours of putting myself in back breaking, straining positions is killing me. Two days later I'm still so stiff I whimper when I have to bend or sit still too long.

It is expensive, but trust me it works!

we have lots of fur around here too, it drives me a bit inasane but I also refuse to have a real long haired dog for all the reasons that you said!

Sheri - are you talking about the thing that looks like a metal comb on a handle? I never figured out how to work that.