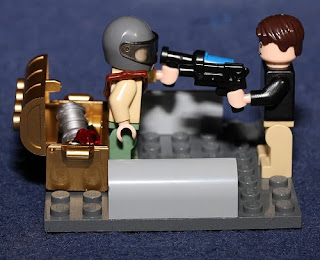 Lately all Bear does all day is sleep unless he's getting to do something he wants (fishing or... well, pretty much fishing). His pdoc had recommended that he try to stay awake during the day so that he'd sleep better at night (he gets only 5-6 hours a night and according to the sleep study he's not getting enough REM sleep).
When I say anything to Bear about sleeping he denies he's asleep and bites my head off. I hate confrontation, always have, so I stopped bugging him (which was his goal I'm sure).
Over the years we've tried many different sleep meds, but nothing seemed to work more than a couple of weeks. Both kids have been on Melatonin for years, but recently I looked at how it works and realized that didn't make sense. I took them both off and it doesn't seem to have effected their sleep patterns at all (Bear still doesn't sleep and Kitty still does).
Yesterday I was hormonal and really tired of watching Bear sleep through the day. I'll admit to some passive aggressive behavior over the last couple of days (driving jerkily - pun intended - to make it difficult for him to sleep in the car and being noisy and "clumsy" when I walk around the room he's "not" sleeping in).
Apparently Bear has given up. He's stated many times that there is no point in making plans because no on lets him keep them. When he's asked to participate in things like IEP meetings, study skills trainings, therapy, family meetings... he chooses instead to shut down. Then says no one listens to him, and blames everyone for judging and controlling him.
So yesterday during the silence of the drive to Bear's therapy I started fuming and decided that I was tired of avoiding confrontation with Bear. He may want to sleep through the next year, but I choose to see this as one last year to reach him - and if I don't, then at least I can say I tried.
We got to therapy and Bear threw himself down on "his" couch, closed his eyes as though he were exhausted and then sullenly answered the therapist's questions as briefly as possible. Pretty much saying everything's "fine." I probably snorted made a polite, ladylike sound of disagreement because the therapist turned to me and asked me how I thought the week went.
I talked about Bear sleeping through the week unless he was actively participating in an activity of his own choosing. I mentioned I was strongly considering "poking the bear" as I was tired of avoiding confrontation. The therapist asked what I meant and I told him I was thinking about not letting Bear get away with his avoidant and verbally abusive behavior. Bear started getting irritated and shut down (he hates "criticism"). Actually he told us he was not going to talk anymore. The therapist asked Bear a question (sometimes this works), but Bear refused to speak.
So the therapist continued to talk to me, about what Bear could do to earn his way back to the way things were at the beginning of last Summer (we had allowed Bear quite a bit more freedom until he started skipping school, drinking, hanging out with kids doing drugs, and generally getting into lots of trouble). I told him I thought Bear needed more support and rules and that's why he struggles.
Bear tried to talk to the therapist and the therapist cut him off. Telling Bear that Bear had said he didn't want to talk. Bear got torqued and walked out.
The therapist and I continued to talk. I assured the therapist that Bear wouldn't go far and that he would return on his own (Bear did about 10 minutes later). Bear participated (ish) in the rest of the conversation. Bear was calm and the incident was completely forgotten.
We talked about some ways he could participate more in family life (like we could eat together as a family instead of in front of the TV). This most likely will not happen, but we decided that at least one parent eating with Bear was plenty.
All the way home Bear and I talked. We sat in the driveway and talked some more (over an hour!). Did I mention the Texas Heat is HOT?!!

Posted by marythemom at 9:33 AM

Mary, did you see what I blogged the other day about Niacin? We are on day 5 of positive interaction with V.. I am a little unsettled by it because it has been MONTHS since she has shown any positive behavior AT ALL. And it coincides with when we put her on niacin and bumped it up to 1000 mg/day. I'm not ready to say it is the silver bullet.. but on the other hand, it might be worth a try (if he will take it).

I started him a few weeks ago on B12, which for some reason I thought was Niacin, but of course it isn't. I'll see how expensive it is at the grocery story, because we can use all the help we can get, but supplements add up. I wish Medicaid would pay for alternate treatments like supplements and NeuroReorg (which he actually said he would be willing to try - it's active).