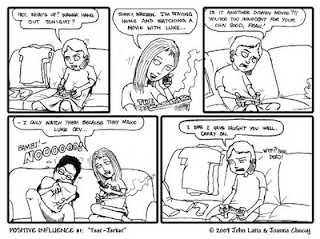 Letters to God - watched this movie last night with the three oldest kids (Ponito was playing at my sister's). Very good movie, but definitely have a box of Kleenex. EVERYone cried even though it was mostly happy. It's reminiscent of Facing the Giants (which Bear loves because it's about football). Not amazing acting, but a good message that doesn't totally blast Christianity over your head to the point you want to rebel from it.

The second movie was more subtle, but triggered a lot of discussion for Hubby and I.

Den Brother - This is a "made for the Disney Channel" movie, about a self-centered high school student who only cares about the fact that he's a star hockey player. His friends and father are fed up with him and his attitude. He gets suspended from the team, and in an attempt to motivate him to change his attitude, his father dangles the possiblity of getting a car and assigns him lots of chores and to watch his little sister and her scout troop. It takes him a lot of tries and the assistance of adorable little girls, but of course the finally gets it.

I'm wondering if it was too subtle to use this as an example to Bear. I pray for the change of heart the boy in the movie shows, but of course the boy in the movie "only" lost his mother. Other than that he's your typical privileged Disney character (although of course not having a parent or two is practically required for main characters in every Disney movie).


Kick - A$$ - NOT for kids. Think Kill Bill, but the person doing most of the blood-spurting, gory killing is a cute 11 yr old girl with blond pigtails (although her superhero character "Hit Girl" sports a lavender anime style wig).
Posted by marythemom at 10:52 AM

Email ThisBlogThis!Share to TwitterShare to FacebookShare to Pinterest
Labels: movie

So jealous you have time to watch movies. I probably shouldn't watch Kick*ss because I really liked Kill BIll. Does that say something about me???