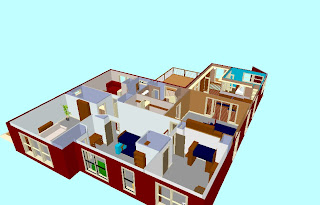 I used to have lots of time on my hands so I played with designing our house and interior decorating. I had a CAD (computer aided drafting) program that I'd purchased off a bargain table at a discount book store. I spent hours and hours entering exact dimensions, moving walls, figuring out how to put things at an angle or adding features so it looked exactly like our house. I quickly discovered I really liked it so I searched the internet and found some upgrades. We wanted to add on to our house so I felt really productive.

I decided I wanted to upgrade the program and discovered that the new version could do amazing things, but it wasn't compatable at all with the original so I would have to start over. I was having fun and I still had all the dimensions so I decided to go for it. Fun!! Then I had to reload the program a few times (changed computers), and I upgraded several times. Each time importing the old files and playing with them, tweaking them, and adding to them.

Well, you know my answers, but here they are anyway.

I found myself looking at this situation in the school setting. My 12 yo son was a nightmare of behavior challenges when we got him at age 4 1/2. He had made so....much progress by the time he got to first grade (new school) that I didn't really realize how challenging he still was to others. I was sitting in an IEP and saying, "But, you don't realize how far he's come..." when it hit me that I was not finished yet. I assumed he'd just keep improving since I'd seen such dramatic changes, but I think he'd plateaued and I just didn't notice. I believe I was so shell-shocked from all of the negative behaviors, that I was just relieved most of them were gone. Parenting these kids is so much work (hard, hard work) that it's very tempting to just take a break and breath for awhile and believe things are ok - and they may be "ok", but I guess we do owe it to them and our families to keep striving for higher levels of functioning.