The stress around here is sooo high!

I wasn't going to tell y'all because I didn't want to hear about what a mean mama I am, but we're not doing Halloween again this year. Two years ago we were attending a private school that didn't allow Halloween and Kitty couldn't handle it anyway so we stayed home. Last year Kitty was only recently out of residential psychiatric hospitalization, and we stayed home, ate pizza and watched movies. This year, I just don't want to do it. The negatives way out weigh the positives I can't think of - and Kitty still can't handle it.

Needless to say I'm not very popular... but I'm used to that.

Bob, who is in mostly Advanced Placement classes is failing two classes. She does nothing but study. All... The... Time... She's talking about going back to regular ed World Geography next semester and I hope she does. 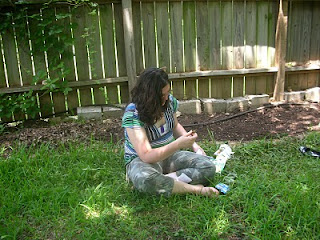 Kitty is also failing a class. It's not one of her core classes, but it's one of her few regular ed classes - Health. That's not at all what I'm worried about for her though. She's struggling with stress right now. I've done everything I can to reduce stress here at home, but she still spends hours outside talking to herself. Of course there's almost nothing I can do about the stress at school - most of which is social.

Kitty is mostly having issues with boys. She doesn't know how to interact with them. She lets them tease and poke her (which scares and upsets her, but she won't admit that). She gets mad crushes and doesn't keep it to herself so everyone teases her.


Now to make things more complicated she has a new boyfriend. This boy is a Senior! *arrgh!* She's 15, but only a freshman. He's almost 18. She doesn't understand why this worries us. I've tried to explain "life experience." We've mentioned "jail bait." Bob has even mentioned the fact that if she gets close to this boy, he's going to be going off to college or the military soon. Kitty says neither of those matter because she's not going to let him that close to her (at least shes' honest!).
Bear as always knows the boys she likes, and has apparently been interfering. He told the last boy Kitty was interested in that Kitty liked him, before Kitty could. He's been teasing Kitty unmercifully. This new boy is in ROTC (which Bear was last year) so Bear knows him too. Friday Kitty came home just furious at Bear because there was a rumor that Bear had threatened to beat up the new boy.
Sunday he came to our church (yes he drives) and went to Sunday school with her. He had to leave fairly early to get to work. I guess it's official. Kitty has a boyfriend.
Yes, she's very aware that she is not allowed to be alone with him. Ever. She seems OK with that.
Posted by marythemom at 8:32 PM

We skipped Halloween, too. There's some serious colleral damage with extended family. Oh well. We ditched the family party at the last minute 'cause they changed it from what was supposed to be a FALL THEME ONLY party to a stealth Halloween party at the last minute because they just couldn't resist and didn't think it would be "that bad" and they also made it clear that I was making way too big of a deal over my distain for Halloween and I just needed to buck up and deal with it. They learned differently. Obviously they don't get it anyway...so maybe the distance is good for awhile.

Other than that, I don't really care how unpopular I am with the rest of the world. Most of them don't get it either. The thing that's most important to me is that I'm popular with my kids. We found a way that my bio daugther could participate in Halloween for a little while, the but the boys didn't do much. They had some simple costumes (a bandana, a foam hat, and horses they made from swim noodles themselve) and they were cowboys. They were thrilled. They only went trick or treating at one house...my son's school teacher. He is really good to work with us and invites all the kids in his class to come trick or treat at his house every year. It turned out to be just the right amount of Halloween for the boys.

By 7:00, thnough, we were all home, hiding in our darkened house with pizza, movies, and a Wii tournament. We didn't even answer our door when all the other trick or treaters rang the doorbell. But, we did make a game out of not getting caught. When we did, we handed out candy that was left over from a recent parade - recycling at it's finest! I still have some left. Maybe I'll save what's left until next year. >:-)