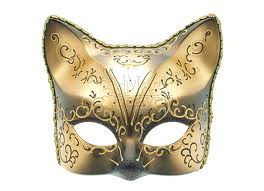 I HATE that Kitty's mask is so perfect that she can even convince the hospital staff that she's "cured" as soon as she gets homesick. The school thinks she's mostly "fine," even though she's been hospitalized 7 times this year (3 times this month!). They're ignoring all the reports from the doctors and therapists, because obviously Kitty's issues are "all at home.' Even when Kitty is at her most unstable she usually only "acts in" when in public.

Her self-esteem is almost nil, and she is desperate for the approval of others. She can't handle even the slightest criticism. As she says all the time, she would "rather die,' then let someone see her issues. She only "lets down her hair" at home where she feels safe (and occasionally in therapy). No matter how much I push her to advocate for herself, and let the school know when she's suicidal and needs support, it's barely a whisper.

I'm so sick of looking like I have Munchhausen by proxy. I'm tired of taking her to the hospital every other week. I'm tired of fighting so hard. She's currently in the hospital again, but she'll have to go back to school when she gets out, and they've made it clear they aren't going to make any more accommodations (which means she'll be right back in the hospital). She needs me, but I'm so drained.
Posted by marythemom at 10:42 PM

I can't even imagine how frustrating that must be. I was good with the mask when I was her age too, but I never had the underlying issues Kitty struggles with. I guess I finally learned to manage it. You are an amazing mom! I get so mad for you when I read about how her school is being. In an ideal world it's about the children, but they seem like they are on a power trip. It should be about Kitty - I am so sorry you aren't getting the buy in from them that Kitty, and you, deserves!

I really can't say it any better than Kelley. This sucks. I think if you haven't already tried, I'd set up a camera or camera phone to tape her behaviors without her knowing. So sorry, I guess that's where them showing their azz to any and all is better, more embarrassing in public but gets the point across that they need help.

oh, i'm so sorry! and that munchausen thing? gives me the willies. we have a mom at school that we suspect has some issues in that direction--very different reasons, though!

kids can do very well for a very long time before they slip up and let others in. hoping your Kitty's mask starts slipping soon so everyone gets the help they need!

Nice pic of a kitty mask!

But she does slip at school at least some. But they don't document it. Vidoeing her at home won't help w/ the school's claim that she only has the problem at home. If only you could video things like her breakdown in the nurse's office. Perhaps carry a blank form that says basically "on ___ day I witnessed Kitty (having a meltdown / other)" and see if you can get the witnesses to sign it. If they won't, ask them if there is any way you can get what you need for Kitty without putting their job in danger. Because that is what it boils down to for people like the nurse. I *know* some schools are not above threatening to fire employees who side with the student's needs vs the school's demands.

It really makes me wonder how people who can be so heartless and, frankly, evil, can teach and administer our schools. (Why evil? Because there is potential for death and they shut their ears and hearts.)

I know it is so hard to keep going, to continue fighting. I've called "uncle" too many times to count on lesser matters, and the one place my daughter's health was in real danger it only took her therapist to attend one ARD to get the school to see the light. ... I just don't know what else to do for you; there must be *something* ... Did you ever find out if the school has to pay legal fees if they are found guilty?

What we ended up having to do is just take a "hands off" approach with the school and let them deal with every issue themselves. It only took 2 1/2 mos (after fighting for YEARS) for them to see the light. They were used to me finding solutions and accomodating my son's needs. When he was very young and couldn't handle the noise and chaos of a school bus, did they get an aide to ride with him? nope, I just started driving him to and from school every single day and did that until 7th grade when I finally gave up. So, my son continuously got into trouble on the bus, insulted people, kicked girls, got suspended numerous times and was on the verge of permanent expulsion from the bus before the school would finally give in and say, "ok, I guess he really does have issues with over- stimulation and inappropriate behaviors with his peers". When he made threats to his teachers because they wouldn't let him tap his pencil on this desk obsessively (driving everyone insane) during class THEY dealt with in-school suspensions and "Project Success" suspensions and provided the transportation. It was so....hard for me to watch my son get worse, but I realized that in advocating for him so hard and helping him cope to the degree I had been, I had helped hide many of his issues from others. I looked like a deranged bit-h demanded things for my son who was just a delight for everyone at school - until I stopped and they got to see the real boy who could not cope with the slightest change in schedule or disappointment (real or imagined) without melting down. Munchausens by Proxy is a good example here. I researched that in great depth back in college and it's always stuck with me. That it is actually how I may appear to certain people, since my son is so darn good at triangulating everyone. Is there any way you could back off and just let her melt down at school. Just don't pick her up or let her leave class and that may do it. I know it's hard and it's just plain wrong that we have to let our kids get hurt to prove something to others to get them the help they NEED - but they already are being hurt anyway.

We had a therapist who said that when kids are this over-emotional, no learning is taking place in school anyway so it makes me wonder how Kitty's grades can still be so good.

STS - so far the advocate is not charging us. We're just waiting on the due process.

Lisa - Because Kitty "acts in" instead of "acts out" then me not showing up at school fighting for accomodations won't cause the school any concern at all. She'll just be more of a basketcase when she gets home.