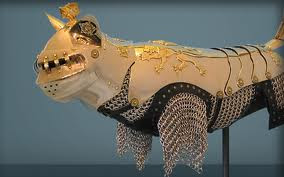 Grandma and I visited with Kitty at the hospital, and she looked great! A tiny bit manic, but you had to know her to see it. Even her jackhammer leg was not vibrating more than the average person's might, and it didn't even start bouncing until we started talking about school. I was thinking, no wonder the hospital is sending her home... this is the best I've seen her in a long time.

I started thinking, maybe she doesn't really need all these meds after all. Maybe the new meds are working. Maybe without the stress of home and/or school, she's OK.

I decided to test her a little, and started talking about going back to school on Tuesday, and what she'll need to do. That she HAS to verbalize what's going on inside. We talked about the rating scales, and I gave her a homework assignment to start writing these down (as of Sunday afternoon she hadn't started - no, I'm not surprised).

She held it together although the leg started tapping (no jackhammer).

I left wondering if she was playing me. NO ONE else was seeing her issues, especially the school, and she hasn't had a strong rage in months. Most of her meltdowns have been relatively minor and she's even toned down the talk about hating the family.

...I know that's not true, but I have to question how this child's armor can be so perfect. Is the school really oblivious and evil?

Another explanation? Usually when Hubby and I visit Kitty in the hospital we see her in a small private room. She usually prefers not to even hug us unless it's out of sight of everyone. If the door is open, she spends the whole time staring obsessively out of it, completely distracted.

This visit was during regular visiting hours and there were 4 other kids and their families in this not so big room. It was fairly loud... and most definitely public. When a staff came in to do a head count, Kitty smiled and laughed with him. At the end of the visit when she stepped away from us to throw something away, one of the male staff said something teasing to her. She laughed and was appropriate, but when she came back she was visibly flushed.

I think she was acting "normal" because she was in public during our whole visit. Which means as soon as she gets home, things will go right back to the way they were before she left... but it also means that she may not ever be able to get the help she needs.

There are 3 major stress causes in Kitty's life:

She appears to be able to wear her full armor as long as she only has to deal with 2 of these. No idea what that means for residential treatment. By removing Family, is she going to be able to hide what's going on underneath so well that it looks like she shouldn't even be there so she'll get sent home, or will she be able to process her Trauma better because we've removed one or two of her stresses.

Speaking of school, Lisa commented that she was surprised Kitty was still doing well in school. The truth is she isn't. When she's in school she usually gets 100s on classwork (which are more about participation), but she's failing the tests and quizzes. Of course she hasn't actually been IN class in weeks. She spends a lot of her time talking to the behavior staff or in the Learning Lab. I think she's getting work done there, but...

One of the As is in Team Leadership (a general ed class. She has all 100s. I get the feeling that's the only grade you can get).

The second A is in Special Ed History. She only has 2 grades in the class (both 90s) and all the other assignments don't have anything next to them at all. I'm assuming they're all missing so she isn't really passing.

The incomplete is in the only other class that also gave her an A last six weeks. This is the teacher that 2 years ago told me that she wasn't allowed to flunk Bear - even though he most definitely deserved it (26 going into final exams, failed finals, but still managed to miraculously pass the class).

Kitty is stressing out about how behind she is in all her classes, even though everyone tells her she'll be fine. She'll probably be out of the hospital on Monday. Her IEP meeting is Tuesday. Finals start a week after that. We've got a request in for home bound. No idea what's going to happen.

What good does it do anyone not to give kids like Bear and Kitty "real" grades? As long as they get As and Bs for substandard work they'll believe they're doing just fine.
The pap that teachers dish out to challenged students about being able to do whatever they want in life may be well intentioned but it's ultimately cruel when the child finds out they're never going to be a marine biologist or a fighter pilot or whatever unrealistic fantasy they had in mind.

I agree Miz Kizzle. It is ultimately cruel and the parents are usually the targets of their anger when reality rears it's ugly head. We try to help them be realistic by pointing out exactly what needs to be accomplished in order to achieve their goals - hoping that they will either step up or adjust those goals, but we are usually accused of being negative or unsupportive - when that is so... not our intention. One semester my son was given straight A's. He didn't earn them in the slightest. I was sick because I have kids who work really, really hard for C's and they were angry, my son was cocky and arrogant, shoving the card into everyone's face and it was a disaster. I don't know what the teachers goal was - I'm sure it had something to do with increasing his self-esteem (which doesn't seem to be a real problem based on his behaviors) but it was a disaster for US.

Kitty is capable (quite obviously) of holding it together quite nicely in the hospital and in other social situations so it makes me wonder exactly what her anxiety must really feel like. I sometimes think my son loses it because he simply feels uncomfortable in some way. Like, if he feels a twinge in his stomach and immediately is convinced he is starving to death and needs to eat NOW (which he actually does do) or he doesn't feel comfortable in a social situation and so he starts asking bizarre off the wall questions.