We had Christmas with Kitty the day before she left to go to the RTF (residential treatment facility). I'm printing out pictures to give to her while there, and decided I needed to share pictures with y'all. I've also got to remember to send pictures to Biomom.

Here's one of my favorite pictures this year! This is 12 year old Ponito. He'll be 13 in February, but this was his favorite gift - a HUGE stuffed animal to complete his collection on his bed (now he has enough stuffed animals to go around the entire perimeter in his bunk bed.

He's been "married" many times since his first "marriage" at age 3 that lasted 1 1/2 years, but he finally seems actually attached to his new girlfriend. They talk on the phone and text, watch movies and play. He's brought her to the house and had a double date with Bob and her 1st boyfriend. It's beyond cute (and extremely well supervised). Crazy part is... his new girl friend is 14 and in 8th grade (he's only 12 and in 7th). My baby is apparently a catch! 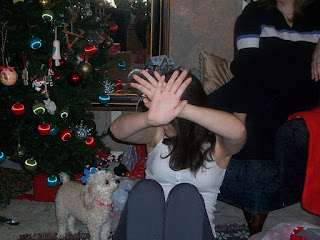 Bob doesn't like having her picture taken. (I have a dozen pictures of the back of her head now).

Too bad Bob, if you act like this, this is what gets posted!


Bear with our little house guest, Sandy. We were "doggie sitting" this little 7lb poodle for a week. I have to say I don't like yap/lap dogs, and this one was not well house trained, had to sleep in someone's bed or she cried and yapped all night, and then pooped and vomited in the bed, and pretty much everywhere. Most of our dogs are literally 10 times her size, and even the cats are double, luckily the indoor cats were fine with her, and the big dogs stayed outside for most of the time (Bear forgot and let them in once, but I managed to snag Sandy before they could do more than sniff noses with her.) She left on Christmas Eve... best Christmas present ever!

My kids and most of the cousins at my Lil Sis's house before they left for to visit relatives.

Kitty's Christmas before she left for the residential treatment facility. I managed to get the silly putty out of these pajama pants (she'd slept with it - and it was all over her sheets, pjs and my furry jacket she'd borrowed and slept in?!)

One of the few pics that hides my double chin!