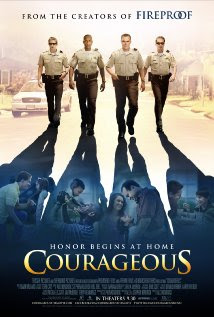 We watched Courageous this weekend (by the same people that made Fireproof and Facing the Giants). It was EXCELLENT.

I LOL (and I don't mean that thing we write when something was kind of funny - I mean I literally laughed out loud until I cried) and COL (cried out loud, tears streamed). Even Hubby and my 18yo son, Bear, "teared up." The only one not as effected was my teenage daughter, Bob (although she laughed just as hard as the rest of us). It's not really written for teenage girls.

One of the most powerful quotes to me was, "I don't want to be a 'good-enough' father." (After his friend asked him why he wanted to change his relationship with his children, and called him a "good enough father."

It could be a tough movie for kids of trauma. How they handle it would depend on their age, maturity and of course issues.

Clearplay wouldn't be necessary for most of the movie. Although most of the main characters are police officers so there are some intense scenes involving violence, drug dealers, shoot outs, and chase scenes... but no one is ever seriously injured.

There's quite a bit of gang related stuff, including a "beating in initiation," although most of it isn't visible.

Of course there are quite a bit of issues with fathers, but it's handled pretty positively. There's a report quoted often in the movie that people who grow up without fathers tend to end up in jail or dead. My main concern was that if Hubby didn't "step up to the plate" then Bear would be resentful, but Bear thinks Hubby does an

The main characters lose their 9yr old daughter to a drunk driver (while she's at a birthday party). They don't show any of it. There is a funeral though.

I highly recommend the movie, but definitely have a box of tissues. I hope it has a lasting effect on Hubby's relationship with the kids. I plan to buy it.
Posted by marythemom at 9:51 AM