Our tree is artificial and went up the day after Thanksgiving – when the boxes came out of the attic. Of course 2 days after the tree was decorated ALL the lights stopped coming on. No one knows why, and I haven’t bothered to investigate. Could be as easy as something getting unplugged - or a cat chewing a wire or the first bulb burning out – knocking out the whole tree? 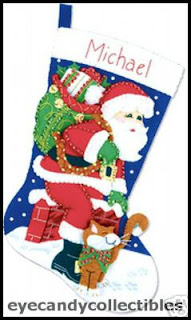 For the kids first Christmas I made those fancy felt stocking with their name on them. It took me months and I only finished Kitty’s (who of course has since changed her firstname!). The next year I finished Bear’s. This year I actually finished Bob and Ponito’s, but now we can’t find Kitty’s! It’s probably in a box they missed when they took down the tree. Or it never made it in the boxes and is buried somewhere in all the clutter. Looking for it is on my To Do list! (Yes, that's a scary place to be!)

I’ve gotten almost all my Cmas shopping done. Bob's list was 137 items long!! So she was easy. Kitty's was only 9 things,but she's fairly easy to shop for too. Ponito's list was long, but fairly expensive (most things were remote control and cost $40-80, but he's still pretty easy going). I've finished all the shopping for the girls and only need a couple of little things for Ponito -but I have almost nothing for Bear!

Bear's list was impossible. On his 9 item list he asked for nothing that cost less than $100! Or for things he can't have.
1. A certain type of phone.
2. Another phone that he would like if he can't have the first one.
3. Still another phone that would work just as well.
4. A bluetooth accessory to go with his new phone. Did I mention we're NOT GETTING HIM A PHONE?! He doesn't need one. Ran up 2! $450 phone bills on the one we got him his first Christmas here, and he uses it to text inappropriate people as well. So NO!!!!
5. A scuba wet suit - $120
6. A BCD vest - $550+
7. A hunting trip - like we'd allow him anywhere near a gun, and we don't have anyplace to shoot anyway, and Hubby would have to get a license, all in all VERY expensive and VERY inappropriate.
8. A pair of Ropers (boots). He has a perfectly good pair of boots that fit and these are expensive.
9. I don't remember what 9 is, but I'm sure it was something he can't have either.

So I confronted him on the fact that his list was all big and expensive and mentioned siblings and other family (hoping he'd give me something I could use too). So he gave me about 6 thing under $10 (mostly socks and underwear type stuff – yea, that’s helpful!). So I’m still stuck. Can’t afford the expensive stuff – still need something fairly nice for a Santa gift. *sigh* Got some ideas, but still not sure what to do. Will have to wait and use part of next week’s grocery money to try again.
Posted by marythemom at 8:48 AM

Wish I could help. J knows it's a poor year so I limited her to asking Santa (because it's been a poor year for Santa too...his stocks are down.) to 4 things and they're a total of $25.00. The big thing is the dollhouse from me but I already had that money squirrelled away.
Good luck with finding Kitty's stocking.

#1 - Kitty's stocking: buy her a cheap plain red thing and write her name on a piece of paper and tape it on. Tell her if she wants her real stocking she needs to find it. I had to do this one year w/ MDS; he never gave me back his stocking so it was burried in his room, we didn't find it for over a year. It's nice to have the extra stocking around for just such emergencies, like visiting cousins, which happened another year.

#2 - Bear's gift: How much are you budgeting per child? What about a really meaningful cross medalion necklace? A Gameboy or Nintendo DS and game?

Up here everyone wants Northface jackets (over $100) and Ugg boots (Ugg-ly!) But DD settled for some Ugg knock-offs. All YDS (he's 17)wants are DS games, Wii games (he bought his own Wii with his own money) and movies. He threw on some token clothing items just to throw me a bone, but his very expensive list is mostly electronics.

Mary please email me. I don't have your email on this computer. Thanks!