At least according to everyone but Bear. 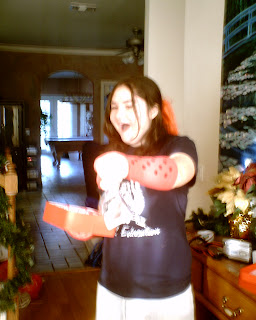 Kitty wearing her new arm warmers (hot pink with skulls), and fake hair piece with both red and black hair, looking at her new skull watch and matching earrings, and fun colors of nail polish.

Favorite gift: My sis gave her a pay as you go cell phone (with my approval), her new stereo came a distant second. She's wearing the arm warmers every day though.


Bob decked out in her new hair bands, PJs, arm warmers and tights (are they called tights when they only come mid-thigh? or in the case of my 5'11 1/4" daughter, just above the knee). This is how the girls greeted me Christmas morning. They're soooo silly! (and I love it!)

Favorite gift: Also her cell phone, but we gave her my old laptop and she's enjoying that a lot. The cell phones cost $20 to activate so the girls are having fun playing with the camera and setting up ring tones. Not sure when they'll be able to afford minutes.


Ponito got all "active boy" gifts. The Ripstick appears to be his favorite gift. Not sure why the camera did this funny thing with this package that makes it look like it's glowing, but it sure is cool!


Bear is bummed. He's jealous of all the other kids' gifts. He got what he asked for... mostly. "Smelly stuff" - cologne and body wash and stuff, a black cowboy hat, some clothes, DVDs of sport movies (I watched Gridiron Gang with him, good movie, but violent!!). Santa gave him a camera which wasn't on his list, and his grandparents got him a new MP3 player to replace the one he claims was stolen.

But it makes him insane that the girls get phones and he doesn't. He wants his old tracphone, and doesn't understand why he can't have it. Hubby will be having a long conversation with him about how stealing a cell phone and an iPod within the last month or so doesn't exactly make us trust him, and therefore this is his fault/problem.

Hubby supervising it all. No, he's not in his undies. His shorts are just riding up a little. That's OK with me. One of the main reasons I married him was for his legs! I know, I know - TMI!

Ooh! And the fact that he makes homemade rolls!

AND the fact that he puts up with silly kids when they do stuff like this! 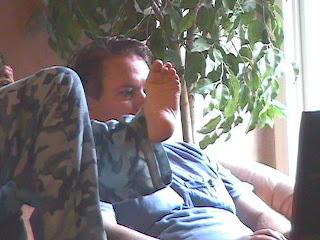 And hey, the girl on the right could never handle the life that the woman on the left manages daily. That's why you are more beautiful now than ever.

I knew I liked you for a good reason!