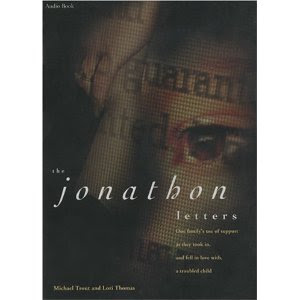 I'm reading a new book called The Jonathon Letters, loaned to me by my dear friend Mike at Advocates for Children of Trauma, and so far I highly recommend it. It is a series of e-mails between a family who take in a "troubled" 4.5 yr old boy and a therapist who lives all the way across the country.

While my kids were older than this, and usually reading books like this kind of upsets me because I think how much better off they would have been if they'd gotten help sooner, this book has been pretty comforting.

I want to share one excerpt before I go to Grandma's to deal with an angry Bear.

"Jonathon in his previous family, exhibited much defiant behavior and no respect for any rules. The family wanted to help him learn ad their motives were probably good. Their response to him however, seemed to be lacking what he needed. As he disobeyed, they added more rules and more structure in order to force him into compliance. The more he resisted, the more structure was added. Unfortunately, the structure did not include holding, closeness. In the end, he was in lots of therapy, a rigid full-day school setting, and little else. Their methods of discipline were probably the same as those that many of us have used with many of our "normal" children. Jonathon did not respond.

The rules had no impact on Jonathon. They did not fit into his perception of the world. By not following them he was able to get a lot of attention and keep things the way he knew them to be.

Jonathon really needed to learn to build a relationship in order to change his point of reference. He is now learning, slowly, how to bond. We are seeing progress. As we see a relationship increase, we see his desire to defy us decrease.

I can't remember the last time I gave Bear a hug, and I have to force myself to lay a hand on him because I know he doesn't want it.
Posted by marythemom at 1:20 PM

Email ThisBlogThis!Share to TwitterShare to FacebookShare to Pinterest
Labels: Bear, The Jonathon Letters

Sometimes, when they look like adults and act like a crud, it is hard to remember the scared little boy hiding somewhere inside.

This looks like a good book. I had read a review about it last week and it looks like it is available in an audio book. I think I'll order it to listen to on the treadmill. Thanks!
~Kari