Sunday was Bear's adoption day. Monday was his 17th birthday.
We have seen some attitude/emotional improvement and on Saturday his therapist commented on it. He seems more awake and not pushing others away quite as hard. Not sure if it's the change in his meds or not. We've added vitamin B12 and also increased his Wellbutrin. Tonight we start dropping his sleep meds which his psychiatrist feels may not be making a difference anyway, and see if that effects his sleep.

Most Friday nights we eat out with Grandma and Poppy (We're so lucky!). Often my little sister and her family join us. Because it was his birthday weekend, Bear got to choose where we ate (Chinese buffet). My sister gave him a Wally World gift card for his birthday (she thought his birthday was Friday).

Bear knew that on Monday Grandma and Poppy were taking all 4 kids to the beach (Bear and Kitty have never seen the ocean). 4 hours in the car each way. Bear can't read in a car (not that he reads anyway, but it makes him car sick), and he's not supposed to sleep during the day. He came home talking about how he was going to apply the gift card to what he owes on his Zune so he can have something to do on the trip. He still owes over $60 on it so that wasn't an option. I thought about gifting him some money for his birthday, but that would mean we had to come up with the $120 to buy the Zune so I decided against it.

I don't know how much was on the gift card. Bear apparently talked Poppy into taking him to Wally world so I don't know what he spent the money on (ask me how I feel about that by the way). I do know that he came home with several bottles of Power*de and he bought a toy for Ponito (who probably gave him cash for it). My guess is that he blew it all on junk food. That's his pattern.
Sunday we celebrated with the family at Grandma's for lunch. Bear was told he could have friends over for a party, but nothing ever came of it. He tends to wait until the last minute and everyone is busy (joy of a Summer birthday too) or it could be that he's afraid no one will want to come so he doesn't ask. I'm not sure.

Bear had requested strawberry cheesecake for his birthday cake. After lunch he went in and started cutting it. I think he was trying to keep everyone from noticing and making a fuss. He didn't want candles. I led everyone in singing him Happy Birthday anyway.

Monday morning Hubby took the kids to Grandma's so they could head to the beach. Once there, Bear of course refused to put on sunblock. Ponito didn't do it either. Ponito is not on meds that make his skin sensitive so he didn't burn. Bear did (but denied it most of the time). The girls put on sunblock, but rolled around in the sand and didn't reapply. Both girls burned.


No one wanted to risk their watch on the beach so apparently they lost track of time and stayed longer than they meant to. They also had a flat on the way home. Poor things didn't get home until almost 2am. Tired, burned and sandy, but they had fun.


Kitty was excited about the sand and shells she brought home. Little tiny broken shells, but just as important to her as huge perfect ones. 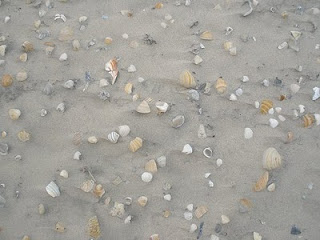 Sounds like things went well (well, except for the Walliness)!! I'm glad to hear it!

Happy Birthday to the Big Guy. How fabulous they went to the beach (sunburn and all). Sunburn is one of those learning by experience kinda things...Next time they may be more willing to slather on the SPF. Wait; does that mean you had ALONE time while they were gone??? Yeah, I'm a little jealous.

Mama Drama - you caught that did you? Yes, I was kid free all day (Hubby took them to Grandma's and I slept in!). It was lovely. I did laundry and caught up on my blog reading (I'm actually down to less than 50 posts to read! Due to the loss of my laptop I'd gotten up to over 300!). After work, Hubby and I went out to dinner where we (mostly) avoided talking about kids and pretended to be normal adults. When we got home we watched a rated R DVD (well, I watched, he mostly slept) and then he went to bed. I worked on my computer until the kids got home.

It was date night in the middle of the week and it was lovely.