Two ships passing in the night 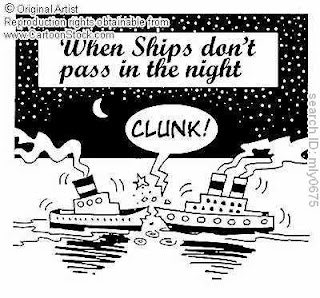 Lately Hubby and I seem to be nothing more than two ships passing in the night. Due to our financial issues and the time of year, Hubby has been teaching scuba almost every evening and doing check out dives most of the weekend. His job is contract, which can be good because he's not allowed to work more than 40 hours (unlike a lot of jobs that require a ton of overtime), but it also stinks because it means he has to constantly be aware of his hours and can't take a little time off without losing money (which of course we can't afford). He tries to go in early in the morning so he can get a full 8 hours in and make it to scuba where he works until 10:30pm (kids go to bed at 9pm and only Ponito is a morning kid so he's usually the only one to see Daddy during the week).

Plus he's still helping me run our company. He mostly pays the bills we can, and deals with the majority of the banks and other creditors (debt collectors). As of now we are one step away from deciding the company just can't hold on any longer without at least one well-paying job, and EVERYone says "we might have something, but it will be next month." Unfortunately the rent and employee salaries can't wait until next month. Hubby is even talking about closing down again. Added to that, Hubby is job hunting and tries to get some down time (he plays on his computer a lot - I think he's addicted to Hulu).

I see him for a few minutes in the morning as he is my human alarm clock. When he gets home he acknowledges my existence (a kiss, but only if I tell him to) and disappears upstairs. On the weekends he naps or works on his computer a lot. I'm a night owl (in case you forgot), and I tend to sit downstairs and work on my computer while I watch TV until the wee hours. He's usually in bed by midnight at the latest. Lately one of my employees has been telling me to go home and take a nap. I must look as exhausted as I really am.

During the day Hubby and I mostly communicate via e-mail or cell phone. We only talk for a few minutes and a lot of that is logistics (who needs to be where and when);what's going on at work, and what to do about the latest kid issue or should be said at this or that kid appointment (Hubby doesn't usually go). I use him as a sounding board, because I know I can get emotional or I'm worried I'm being unreasonable.
Right now though Hubby's upset at me because I overspent at the grocery store. I feel like an idiot for not paying enough attention and now the account is overdrawn and Hubby doesn't have money for dinner this week as he goes to scuba. So I'm not seeking him out and that just makes it worse. I hate this feeling. I want things to go back like they were before we had the kids and the company. We used to joke and tease and hold hands.
Lately I've been noticing we don't joke and tease or play around much anymore. I was reading Lulu's blog and she was talking about all the fun she has with a teenager in the house. I feel like I'm working in a residential treatement center. We occasionally do fun things, but it's not silly and joyful. Struggling to Stand wrote a post that made me think about this concept too. I commented on her post that I think some of this lack of silliness and joy is age. We're maturing. We don't love our kids less we're just tired. Is this true? I don't know.
I have a friend who is 9 years younger than I am. She plays with her kids more than I do. My friend and neighbor has 4 kids and I think she's a good mom, but shee seems like she's more like me and more practical than playful.
Not too long ago I remember thinking Hubby and I still acted like newlyweds (affectionate, PDAs and teasing). The last few years I've noticed we're not doing this anymore. We're too stressed. We're not speaking each other's love language (we just don't spend enough time together to do so). The kids got between us (physically most of the time). We get almost every Saturday night away from the kids (LOVE YOU GRANDMA!!!), but we spend most of the time destressing from the week. And when I say destressing I pretty much mean mindless TV/movie watching and sleeping. We do "reconnect" most weekends, but it's not enough.
We have got to find a way to fix this. At this point all I can think of to do is pray. That's hard for me.
Anyway, thanks for your support y'all!
Edited to add: I wrote this post while very upset last week, but I couldn't post because of my computer issues. Since then, Hubby got paid so we have gas and grocery money again. We've also had some time to talk so the tension has alleviated. I thought about just deleting this post, but decided that others might benefit from seeing that they are not alone in having marital issues. Maintaining a marriage while under a lot of stress is not easy.
Posted by marythemom at 7:37 AM