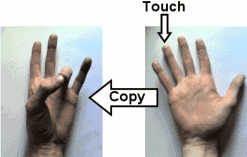 I tried this test of the corpus collosum (Thanks STS!) on the 3 youngest and myself, but I'm not sure what to do with the information. I'll test Bear and Hubby tonight and add the results here.

The test is to see how well the two hemispheres speak to each other through the corpus callosum (which is a bundle of nerves that connects the two brain hemispheres together). I had the kids sit on a stool and rest their hands behind their back (so they couldn't see them). Then I touched the ends of different fingers on their left hand and they were supposed to touch the corresponding finger on the right hand with their thumb. Then I switched hands. The middle two fingers were the hardest to keep straight for all of us.

Kitty went first (because she trusts me more! I love saying that!). She had a pretty tough time, especially with the middle two fingers. It was equally tough with both hands. She is not considered to be dyslexic which this test can be a sign of, but she does have learning disabilities.

Bob - pretty good. Just a few mistakes. We questioned dylexia with her because she reversed entire words all the way through 1st grade, but we couldn't get anyone to test her because she could read (tried to explain to the school that the two had nothing to do with each other, but they said the only test they were allowed to give was letter recognition which of course she would pass with flying colors so we let it drop. She did grow out of it or learn to accomodate for it - I'm not sure which).

Ponito - the best of all of us. No questions of dyslexia for him ever. I'd say his corpus callosum is working perfectly.

Me - the kids really enjoyed testing me. I did OK. I do have mirror dyslexia so I thought I'd do pretty badly, but I think I was about average.

I've also asked my favorite neighbor if she could test her family too, but her family isn't exactly neurotypical either... *grin*

So test yourself (well, you can't really test yourself) and your family and see how y'all do!
Edited to add:
Bear - Bear was not surprisingly not thrilled about doing this, but he complied. The girls weren't there when I had Ponito show him what it looked like. It was very brief, but the results didn't really surprise me. He stunk. He missed a lot/most? of the finger touchs, and he had difficulty getting his thumb to his fingers (not nimble at all). I'm pretty sure he realized it and that's why he quit pretty quickly. I was able to keep him going by switching to the other hand when I saw him shutting down, but even that didn't last.
Posted by marythemom at 9:43 AM

I did the test on my five year old, and he FAILED on every try, except for the pointer finger. What does this mean? Do I do anything with this information?
Cannot wait for my other kids to try it. One had a TBI as a toddler and had learning disabilities, and another has autism. My oldest is typical, so it will be interesting to see what their results are.
Thanks for posting this!

Mr P was pretty bad (I guess I expected that). Mr L was beter than I would have guessed. I aced the test, but I think that was partly because of the tester (Mr L).

brenkachicka, look at my comments on her last post.

A good cc is important for impulse control and reading and certainly a lot more. Since each side of your brain specializes in different things, often whatever it is you need to do needs some input from one half and some input from the other half.

The standard way of helping your cc is to do lots of movement that crosses your midline - put something on your right and reach for it with your left hand.

Wow - I think understanding this is half the battle.