Poor Ponito. He seems to get the brunt of Kitty and Bear's issues most of the time. For a couple of years Kitty hated Ponito. She was jealous of his happiness and admitted that she wanted him to have a miserable childhood like she did. She tattled on him constantly and was furious when we let him get away with stuff without punishing him severely. Made her crazy that he did stuff behind our back (like cuss or not do what she or Bear told him to do).
She had issues with Bob too, but Bob is bigger than she was afraid of Bob and therefore Bob triggered different issues than Ponito. 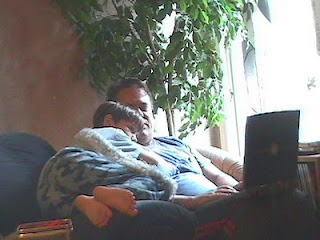 Ponito has always been sensitive. He's significantly younger than the other guys (he was only 7 when 13 year old Bear came to live with us). He is a physical kid. He likes to cuddle and roughhouse. He'll run and jump on you. If he doesn't get his way he'll pout and sometimes cry. He's the kind of boy that the girls like (he's been "married" 8 times I think) and the boys like to play with. If I had to guess, his love language is probably physical touch. He gives the best hugs.

Bear has had some recent altercations with Ponito. Recently he told Ponito that the ice cream I bought was for Bear and Bob only(?!). Ponito got upset and cried. Everyone offered Ponito some ice cream and Grandma ended up buying Ponito candy (yes I have issues with this, but he wouldn't accept sherbet or ice cream). This was the incident that Kitty stood up to Bear about.

Saturday Bear was sleepy and surly (pretty much his usual). I had to run a quick errand and since Hubby was teaching scuba, the kids had to come with me. Kitty asked if she could stay home. She has been earning my trust so I said yes. Bob was reading in her room so while I normally don't leave 2 kids home alone I figured these two are the most likely to be OK.

A barefoot Ponito hopped in the car with Bear and I. Ponito began playing with the sliding door's lock with his toes. Bear jumped on him for "breaking the door." I told Bear to quit telling Ponito what to do. Bear seems to think that if I don't do anything about it then it's his right/ obligation to do so. Ponito was silly and giggly. Bear told him to cut it out. We got to where we were going and I took Ponito in with me even though he was barefoot. No way was I leaving him at Bear's mercy. Bear tried to correct my parenting - I told him to cut it out.

Skip ahead a couple of hours to Bear's therapy.

Bear talked about how Ponito needs to "grow up." Long story short, Bear didn't get to be a happy kid. At Ponito's age Bear was put into foster care. Bear doesn't "see the point" of happiness or any emotions. He doesn't want to have emotions, he doesn't want others to act happy or silly - he finds it annoying and feels it must be stopped. Explains why I don't act silly as much anymore. Bear wants Ponito to stop too. Ponito is persistant and therefore most annoying to Bear.

This is most likely not going to end well.
Posted by marythemom at 12:22 AM

Sounds like MK at 16. It hasn't "ended well", but it has gotten better!