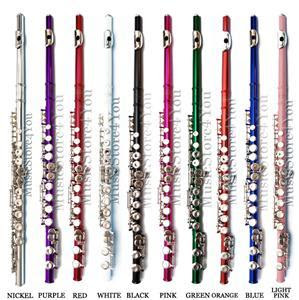 Anyone know anything about flutes? I've got to find one that is as cheap as possible by the end of the Summer for Ponito. He's going to be in 6th grade band. I looked on Craigslist and E-bay but knowing nothing about flutes makes this difficult. For example, these colorful flutes are "closed C Lazarro flutes." Mean anything to you? Me neither. Apparently I can find a flute for anything from $40 used to $4000 (average!) there were even more expensive ones.
I have a cousin who is a professional flutist (prounounced fl-ow-tist for some weird reason), but she lives in Germany and all her instruments are massively expensive anyway. My little sister played in middle school (while she wore braces and was still a little geeky, versus 8th through 12th grade when she was a blonde, busty, smart cheerleader), but she doesn't have her old instrument either.
Why couldn't the boy choose the triangle? or a Kazoo... or better yet a comb with some tissue paper? Why didn't I look right after school got out when all the kids who were dropping band were probably selling their instruments. *sigh*
Posted by marythemom at 2:52 PM

LOL- Sorry, I know nothing about flutes.

I have never played flute, but I have played a ton of other instruments. Here's the thing, cheap instruments are just that...cheap. They usually sound pretty bad and are impossible to keep in tune. Most local music stores (where they sell instruments or sheet music) have rental programs where you can rent your instrument. This is really handy because kids tend to change their mind fairly often. If you can't find a rental, ask his music teacher. He/She may be able to give you some direction.

I wouldn't spend extra money on color, but you do want a "closed C." Don't get anything that has open holes. Open holes are great for experienced players because they can be used to control the tone, but they'll just be frustrating at that level, trying to keep fingers in the exact right position.

Many music stores rent them. Also music schools and academies. You may consider putting a "wanted" post on Craig's List. I'm thinking you wouldn't want to spend more than $500 if you're not sure the interest will last, but maybe prices have changed since I bought mine.

Rent. There is more than one store in your area that does band rentals. If he sticks with it, the band director probably has ideas about how to by a cheap starter instrument, or there may be a loaner program at the school -- I had a loaned clarinet from 5th - 11th grade (when I finally got one of my own.)
Bottom line: Ask the band director, or if he/she can't be reached, ask the people at the rental place closest to the school what the school usually does. Do it NOW before all rentals are out for the year.
(And hey, a flute may end up being nicer to listen to than a triangle is ... or, be thankful it isn't a tuba!)

My 12 year old has been playing for 6 years with private lessons. So, her first flute had an elbow because she was so tiny.... eventually she bought her own. I suggest renting to start with.... even if it's only for the 1st month or so. We like the Yamaha silver flutes. DD bought hers barely used for nearly $1000, but I wouldn't put that kind of money into it until I knew for sure he was serious and sometimes that takes a few months of practice to find out.
angela

Hey there - I read your blog all the time, but am not much of a commenter. I am a high school band director. Really, please, don't get one of those Lozano flutes. They fall apart SUPER quick. Stick to either the Geminhardt or Yamaha brand. You can get them REALLY used for around $200 and it will be fine.

I have seen them at Goodwill stores many times, but don't know how to tell whether they are good instruments. We did rent instruments when our son was in band and found in convenient and not too expensive. In fact, the music store rep came to our school. Be sure and talk to the band director first to see if that will happen at your school.

If it's a student I would suggest a closed hole C flute.

i played flute for 7 years and still trucking. id buy him a cheap flute because the first year or so is all about hand positioning, learning notes, rhythm, and beat. He should get a real nice one when hes more serious about it.

HEY GUYS! BEFORE YOU POST A COMMENT, PLEASE CHECK THE DATE OF THE POST! THIS WAS POSTED TWO YEARS AGO. I APPRECIATE THE COMMENTS, BUT HE'S BEEN PLAYING ON A RENTED FLUTE FOR 2 YEARS NOW. IN FACT, WE JUST PAID IT OFF LAST MONTH. THANKS!

Sorry for the All Caps, but I wanted the commenters to notice it.