Sunday we were supposed to eat lunch at the park with both my parents and their spouses, my sister and her kids and of course my kids. Hubby was teaching scuba.

Saturday night after dropping off the kids at Grandma's to spend the night (I love this!), I got a call from Poppy (step-dad) saying that plans had changed. My sister decided to have lunch with ex-husband while our dad was in town to "supervise."

Alcoholic ex-husband just got out of jail and hopefully hasn't had time to completely fall off the wagon, as usual. Whenever Daddy is in jail (often), my sister tells her kids that their dad is very sick (which he is) and in the hospital (which he wasn't, although he has been - alcohol-induced hepatitis, bulemia, facial reconstruction after a bar fight, and of course, rehab...). She never takes them to jail/prison(s) to visit. So they are excited about seeing him. They are 6 and 9.

I worry that she is keeping this from them. They don't know better then to get in a car with him or let him take them somewhere. They probably feel abandoned by him. I guess it's better than constantly running him down (verbally - although the other has possibilities too!).

So anyway, I got to sleep in! Yea! Right up until 8am when my step-mom called to make sure I knew about the plan changes. *sigh* She thought I'd be awake getting ready for church, but Hubby had the car so I couldn't go. Of course I couldn't fall back asleep so I got up and puttered around. Even worked out a little!! Of course I pinched a nerve in my leg that has left my right thigh tingly and kind of numb and my neck totally out of alignment (saw our cousin the chiropractor this morning).

The kids were all upset that we weren't going to the park after all so my sweet parents (Grandma and Poppy), bought us lunch at Subway and took us after all.
Bob had other plans.
(Side Note: Bob apparently had pancakes for breakfast, 3 frosted sugar cookies, one bag of jelly beans, and "some candy" all before lunch. Don't know if that had anything to do with what happened, I'm just sayin'.) 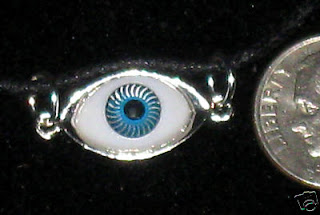 I calmly opened the side door of the van and again asked for the balloon. Bob chose to keep yelling and cursing. I took away Bob's purse and pillow. Bob informed me that there was nothing I could do or take to make her give me the balloon. I reached out and held onto her necklace that she had on and informed her that she needed to give me the balloon because there WAS something I could take if I needed to. This is not her necklace by the way, just one I found a picture of that looks similar.

After screaming and cursing some more, Bob chose to gouge her nails into my forearm and that's why I went ahead and broke her necklace. At which point she hit me with a right hook to my cheek and then burst into angry tears. I managed to restrain myself from hitting her back. Poppy pulled up and Ponito and Kitty (gratefully I'm sure!) climbed into his car and went on to the park.

Ugh. It sounds like you had your hands full. I hope your arm is okay. Kids can drive you crazy. When I read that you broke her necklace I winced. I'm sure you're sorry you did it. It reminded me of the time my son was getting on my husband's case about spitting while he talked. (I didn't notice it and my husband usually doesn't do that) but it made my hubby so mad that he spit on our son's pizza while we were eating in a pizza place. I ran into the bathroom and threw up (I have a delicate stomach!) and our son yelled at his dad for spitting on his pizza. That was eight years ago. Our son is 20 now, a sophomore in an excellent college and getting great grades but he still reminds his dad about the time he spit on his pizza.
It's hard to deal with kids as they get older and they refuse to back down. Too much sugar sounds like the culprit, that and picking up some tricks from Kitty. I hope things are going better for you today.