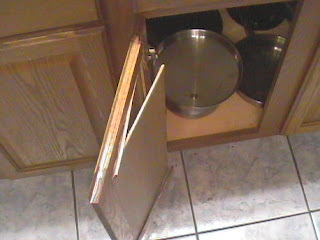 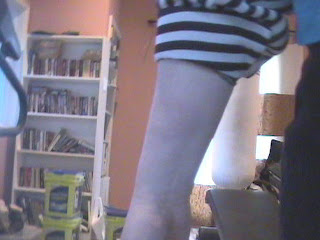 I don't know if you can see it, but this is the bite mark from Kitty last week. And the cabinet door she kicked in.
Today Kitty escalated during therapy. Our therapist is amazing and kept her calmer then I could have, but at the end Kitty still threatened to kill herself if we didn't give her what she wanted. She admitted that she didn't mean it and it was just a saying, but she says it often. We've told her many times that it's not acceptable. We've often confronted her with how seriously we have to take this every time she says it.
The therapist asked if Kitty had made a plan or thought about how to kill herself. Kitty said no. When the therapist asked if Kitty could commit to being safe though, Kitty said "probably." The therapist asked several times and Kitty treated it like a game. Finally the therapist got through to her that we were serious and would have to have her admitted again to a psychiatric hospital if she really couldn't promise she could be safe.
Kitty admitted to having suicidal thoughts. She could not commit to being safe. She agreed that it was a good idea to be admitted. Hubby took her to the hospital. We engaged the child safety locks on the car doors and she was OK with that.
The therapist pointed out how much she's distancing herself from us. Something is definitely making her worse. School is a big part of that, but she'd already been going downhill for months.
Of course if you ask Kitty what's wrong, she'll tell you we don't love her. We don't trust her, and most importantly we love the other kids more than her and won't give her what she wants.
She is one seriously mixed up kid. Her world is soo distorted. She thinks family is evil and everyone in our family hate her. If she's told no or thinks others are getting something she's not, she just can't handle it and feels unloved and threatened. She doesn't trust us at all. She also has NO CLUE that she has issues. She denies it completely. If we point out our concerns then she just promises she'll never misbehave again if we'll just let her have whatever it is she wants right then (watch a movie I think is inappropriate, have a big birthday party, go to the school dance...).
So Hubby's birthday was spent dealing with the bank and our business finance issues all day, getting yelled at by our daughter for a couple of hours and then spending 5-6 hours sitting around admitting our daughter to a psychiatric hospital.
Happy Birthday Sweetheart! I love you!
Posted by marythemom at 11:53 PM

I'm sorry you are going through this. And amazed at how wonderful your therapist is! You just described my 16 yr old DQ to a T. I hope something good comes from this for you. We had to get DW into residential and I don't see any changes. She says what needs to be said to look like she understands. Keep taking pictures for documentation and write notes every day. I haven't done a good job of that and wish I had.

Wow. I hope they can help her.

May peace be with you through this tough time. My heart goes out to you and your family, Mary.

OH- I hope it helps her. Sounds like she is having such a hard time, so resistent to belonging. Good luck.